With all of the media attention tightly focused on San Bernardino’s conjugal killers, you may have forgotten about a little pseudo-scandal that was previously the foremost fetish of Fox News and other right-wing media. Driven from the front pages was the Benghazi affair that had been the cudgel with which Fox News was beating up on Hillary Clinton for the past couple of years. Well, it’s back. 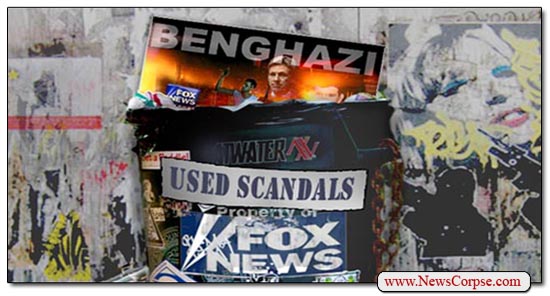 Thanks to the release of an email obtained by the rightist muckrakers at Judicial Watch, Fox News is once again satisfying its lust for the Libyan outpost that was attacked in 2012. And even though every investigation, including those conducted by Republicans in Congress, has found no wrongdoing by Clinton, President Obama, or any other government official, the obsession to cultivate a narrative that indicts Clinton for imaginary crimes remains in effect.

The email that is stirring the Benghazi stew is reported to be from the Defense Department to Clinton’s deputy chief of staff. Fox is claiming that it contradicts testimony made to Congress by former Secretary of Defense Leon Panetta. The email said in part…

“We have identified the forces that could move to Benghazi. They are spinning up as we speak.”

From that snippet, and absent any of the sort of research that real journalists do, Fox News immediately designated the email a “Smoking Gun” It was covered on Fox & Friends by former Survivor contestant Elisabeth Hasselbeck and retired judge Andrew Napolitano:

Hasselbeck: A newly released email from the Pentagon may be the smoking gun in the Benghazi investigation. The email addressed to top aides of Hillary Clinton shows the United States military was gearing up to respond to the Benghazi terror attacks. A message from then-Secretary of Defense Leon Panetta’s chief of staff reads this, quote, “We have identified the forces that could move into Benghazi. They are spinning up as we speak,” end quote. The email contradicts statements made by Panetta, who told the Senate after the attack that there was no time to get forces to Libya to try to save the people there. It now looks like the only thing standing between the terrorists who overran the compound and the four Americans who lost their lives was a green light from the State Department. Fox News senior judicial analyst Judge Andrew Napolitano is here with reaction. This is big.

Napolitano: This is huge. And it’s extremely troublesome for the Obama administration today and for Mrs. Clinton.

Actually, this is just another in a long string of symptoms that can only be attributed to Smoking Gun Delirium Disorder. And every instance of Fox’s alleged smoking guns has turned out to be shooting soap bubbles. In this case it doesn’t take much work to determine that this email has no real significance. It does nothing to contradict Panetta’s testimony, in fact, it affirms it. Panetta explicitly cited the same military resources identified in the email when he appeared before Congress. And while Fox says that there was no response, the facts show that there were military deployments. However, neither his testimony nor the email indicates that the military response could come in time to intervene in the attack.

There is no doubt that this new smoking gun will suffer the same fate as all the others. Despite their desperate yearning for some nuclear fallout to land on Obama and/or Clinton, Fox News will come away disappointed. But that will not dissuade them from continuing to throw mud at the objects of their hate. They know that their audience will only retain the misinformation that was broadcast. And that’s because they drop the subject after it fails to advance their narrative. That’s why you haven’t heard about Benghazi since the last false email story. And it’s why you hear about it from Fox now that this story has been debunked. 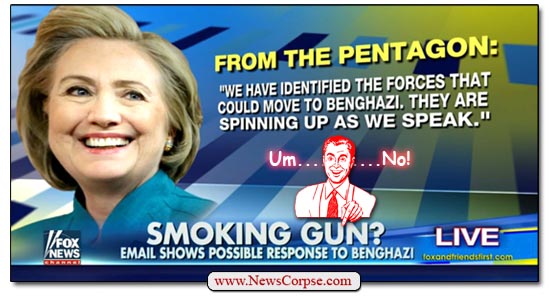 6 thoughts on “Jonesin’ For Benghazi: Fox News Takes Another Hit From Their Stash Of ‘Smoking Guns’”