One way of recognizing that the Republican Party has devolved into irrelevance is to consider the field of potential endorsers valued by the leading candidates. On that score, the most talked about people coming forward so far have been Sarah Palin (for Donald Trump) and Glenn Beck (for Ted Cruz). If that doesn’t certify the demise of the GOP, what does? 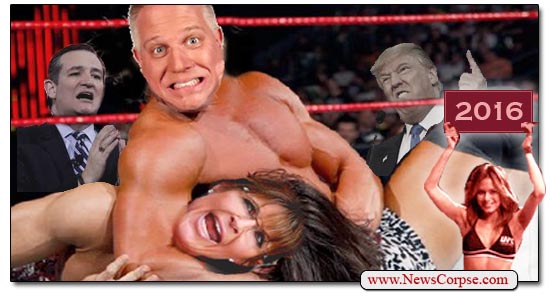 Palin’s endorsement came yesterday in Iowa and was universally received with ridicule and some surprise that anyone still actually cares what she thinks. In addition to giving one of her patented displays of vomiting incoherence, she veered off on a revolting personal tangent to blame President Obama for the breaking news that her son was just arrested for beating up his girlfriend and drunkenly brandishing an AK-47.

Shortly after Palin’s endorsement, the Cruz camp announced that Glenn Beck was signing on with him. That’s right, the man who is convinced that God has turned his back on America, and that the End Times are upon us, is hooking up with the Cruz Evangelical Extravaganza just in time for the Apocalypse.

The list of endorsements for both of these candidates is downright hysterical. In addition to Palin, Trump has sewn up Jerry Falwell Jr., Phyllis Schlafly, and Michael Savage. Cruz has nailed Beck, Phil Robertson (Duck Dynasty), and homophobic Christianist James Dobson. Neither candidate has attracted the support of anyone with knowledge of, or experience in, government – a distinction of incompetence in which they take pride. It’s a complete transition to celebrity politics and reality TV campaigning.

The Palin/Beck match-up, however, may be the big draw based on entertainment value. Beck recently announced his split with Palin, whom he called a “clown” that he was “embarrassed” to have ever supported. He has also been hammering Trump with accusations that he voted for Obama. Beck even produced an infographic outlining the mostly speculative reasons for making that accusation (most of which he pinched from Buzzfeed). All of this spurred Trump to fire back in a tweet that “Wacko @glennbeck is a sad answer to the @SarahPalinUSA endorsement that Cruz so desperately wanted. Glenn is a failing, crying, lost soul!”

So it is definitely on. The radio talkers and the unreality clowns are gonna have at it big-time. Very little of substance will be involved, and the issues that really matter to voters will be ignored. But there will be pile-drivers and hammer-locks and endless ranting about the gay Kenyan Muslim that has ruined America. If this were pay-per-view it would make a bloody fortune. As it is, it will drive more people away from the rotting corpse of the GOP. So Democrats can be heard from the rafters chanting “Bring it on.”