Who knew? One of this country’s most divisive, dishonest, and unrepentant purveyors of hostility seems to still have some capacity for shame (if you can believe him). Glenn Beck appeared at rally in Washington, D.C. (where he never wants to go back to again) to oppose the Obama administration’s deal to constrain Iran’s nuclear weapons program. Also on the podium were arch right-wingers like Ted Cruz, Donald Trump, and Sarah Palin. Sometime between that event and the next morning, Beck had some sort of revelation with regard to his relationship with Palin. 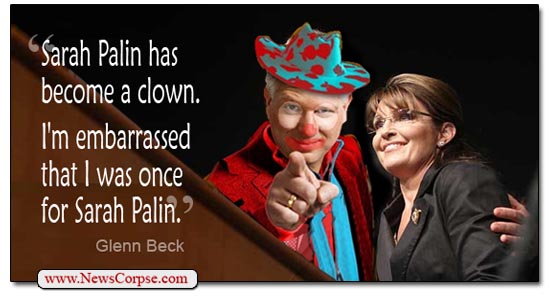 On his radio program this morning (video below) Beck took aim at Palin for reasons he didn’t make clear. He mentions that he “doesn’t know who she is anymore,” and “doesn’t know what she stands for.” Apparently he’s upset (jealous?) that he saw her talking to Donald Trump, who Beck is not fond of, and asks “What the hell was that?” He also admits that they had a “falling out” because “”she was listening to people who were lying to her about me.” However, he doesn’t go into who those people were or what they were saying. But the most striking comment he had about his former BFF was that…

Well, now he knows how most of the rest of the country feels about having Palin presume to speak for us. But it’s still ironic that the man who describes himself as a “rodeo clown” is suddenly seeing Palin in similarly derogatory terms. It’s kind of like the overgrown troll Donald Trump calling Carly Fiorina ugly. But what changed that altered Beck’s opinion of Palin? Certainly Palin hasn’t changed. She is tossing the same word-salad incoherence that has defined her since John McCain unleashed her, making all of us suffer for his foolishness and desperation.

You have to wonder whether this epiphany by Beck will lead to similar insights. Already Bobby Jindal seems to have seen the light about Trump. At a speech at the National Press Club Jindal said that Trump is “a carnival act.” He also called him a shallow narcissistic egomaniac.

Of course, this isn’t news to anyone with a functioning brain. The problem is that there seem to be so many intellectual zombies on the right to whom cartoon characters like Palin and Trump make sense. So when someone like Beck confesses that his prior support for Palin embarrasses him, it is a promising development, even though it is probably inspired by some selfish motive. It offers hope that supporters of Trump will soon feel some shame themselves. We know that many people who voted for George W. Bush are denying it today, and the current crop of Republicans are ashamed to even say his name.

It is too much to expect that any of those who come to realize that it was a grievous mistake to support nut jobs like Palin and Trump (and Michelle Bachmann and Herman Cain, and pundits like Beck, Rush Limbaugh, Sean Hannity, etc.), will ever come to accept a progressive agenda supported by history and facts. But for now perhaps we should be grateful that they can at least experience the cleansing quality of shame and let go of their delusions. It’s a small step forward, but it is a step. At least until they take two giant leaps backwards, which for them is always a possibility.