Anyone who has been paying attention to the campaign of Donald Trump already knows that he is an unabashed racist who is supported by Ku Klux Klan groups and has white supremacists campaigning for him. Now we can also point to Trump himself re-tweeting his fellow white supremacists. 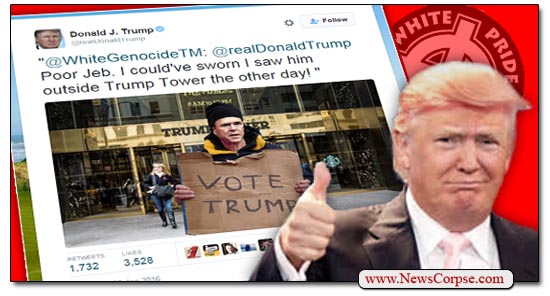 The original tweet posted by a user named WhiteGenocideTM, said: “@WhiteGenocideTM: @realDonaldTrump Poor Jeb. I could’ve sworn I saw him outside Trump Tower the other day! “ So it was not exactly a secret that the tweeter was an openly racist douchebag. His Twitter page features incidents of various minorities assaulting white people. He is also promoting a pro-Hitler film.

There is simply no excuse for disseminating this sort of bigotry or engaging with its proponents. However, in context with Trump’s prior communications it is readily understood. News Corpse has previously reported that Trump is admired by KKK groups who see his candidacy as huge boost to their agenda:

What’s more, white supremacist organizations are actively campaigning on Trump’s behalf. One group launched a robo-call operation to inform Iowans that Trump is their “Great White Hope” for 2016. The recorded message said…

“I urge you to vote for Donald Trump because he is the one candidate who points out that we should accept immigrants who are good for America. We don’t need Muslims. We need smart, well-educated white people who will assimilate to our culture. Vote Trump.”

This is the sort of environment that the Trump campaign is deliberately fostering. His theme from the day he announced was rooted in racial politics and division. The only predictable outcome was the mainstreaming of the views of white supremacists and the advancement of their cause. In that regard, Trump has become their Grand Wizard and the most openly racist major party candidate for president in modern times. And his supporters are as guilty as he is. That will be the enduring legacy of campaign.