Ever since Donald Trump announced that he was too scared of Megyn Kelly to participate in the Fox News debate, he has been attempting to tweak his story to make himself look less like a weasel. That effort has been a hysterical series of blatant lies and distortions. In the process he provided the best evidence that the image he is trying to present is utterly false. 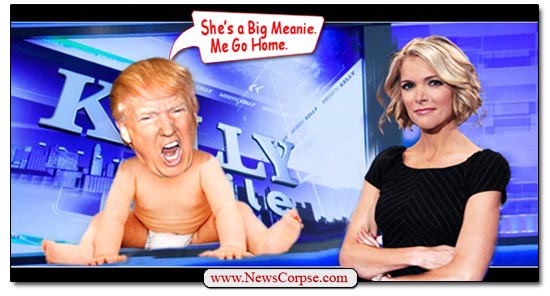 The basis for this feud lies entirely on Trump’s whining about having been asked a question by Kelly about his past derogatory remarks about women. It’s a question that would have come up in the campaign at some point whether by Kelly or a Democratic opponent later on. So Kelly actually gave Trump an opportunity to respond in a friendly environment. However, his gargantuan ego prevented him from seeing the reality of the situation and he has been lashing out at Kelly, with varying levels of profanity, ever since. This culminated with his demand that Fox remove her as a moderator of the upcoming debate.

Fox had no intention of sidelining their anchor and that led Trump, who isn’t accustomed to being told “no,” to throw his hissy fit and bow out of the debate. Today on MSNBC’s Morning Joe, Trump‘s campaign manager, Corey Lewandowski, was asked to be specific about why Megyn Kelly “rattles Donald Trump’s cage unlike anybody else?” He said that…

“This has nothing to do with Megyn Kelly. What this is about is Fox News, which is making tens of millions of dollars off the debate. It’s Roger Ailes, it’s Fox News, they think they can mess with Mr. Trump. Mr. Trump doesn’t play games.”

Then Trump himself said the same thing in a tweet:

“It was the childishly written & taunting PR statement by Fox that made me not do the debate, more so than lightweight reporter, @megynkelly.”

Nothing to do with Megyn Kelly? That’s a stretch for most people, but Trump is a world-class liar. Trump’s camp is attempting to shift this from the original source of the dispute to a broader field of enemies in order to keep from looking like a big weenie who is afraid to answer questions from a mere woman. It’s going to be difficult for him to escape the truth considering how well documented the record is.

It’s also going to be difficult when he is contradicting himself within a few hours of his claim that it’s Fox, not Kelly, that he is boycotting. That contradiction came today with the notice that he will be a guest on Bill O’Reilly’s program tonight. If his problem is with Fox News, then why he is gracing the O’Reilly Factor, Fox’s top-rated program, with his presence, but he’s still skipping the debate? If he’s upset with the network, shouldn’t he stay off of it? Obviously his anger is not directed at Roger Ailes or the network, it’s directed squarely at Megyn Kelly, the debate moderator.

What’s more, the reason for his original outrage was Kelly’s question that called on him to answer for his fits of misogyny. Well today he added to that record by calling Kelly a “bimbo,” albeit in a classically passive-aggressive manner. Trump tweeted…

“I refuse to call Megyn Kelly a bimbo, because that would not be politically correct. Instead I will only call her a lightweight reporter!”

Of course, in that comment he is indirectly calling Kelly a “bimbo” as well as undoing his carefully crafted image as an opponent of political correctness. Notice that he is not refusing to use the term because it’s wrong, but only because it would not be politically correct. So he obviously believes that shes a bimbo, but is too wimpy to say so. Will his followers stand for that? [Note: His followers will stand for anything, including seeing him commit murder. That’s how stupid he thinks they are, and they even stand for that]

Another example of hypocrisy occurred when Trump said that you can’t mess with him, that he doesn’t play games, and that Fox’s PR statement was “childish” and “taunting.” Then he posts his own childish and taunting tweet in a response to Ted Cruz’s offer to debate one-on-one. Trump said “Ted Cruz wants to debate me again. Can we do it in Canada?” That’s so mature.

So where will Trump be during the debate? He is saying that he might hold a fundraiser for veterans at the same time. As much as some veterans are in need of assistance, it is just disgusting that Trump would use that as a political retaliation. If he sincerely cared about the welfare of veterans why didn’t he schedule a fundraiser last week or last month or at any other time unrelated to this dispute with Fox? Why doesn’t he give some of his billions to them without making it part of his tantrum? The vets should be insulted that he is using them as political props.

Trump is also whining about how the ratings for the debate will suffer without him. That’s probably true, but it demonstrates that all he is interested in is the commercial viability of the event. He doesn’t care about the democratic process, the free press, or accountability to voters. It’s all about money and ego to Trump.

And then there’s this: Trump was interviewed by Megyn Kelly about a debate that he was trying (and failed) to put together with Newsmax in 2011. At that time he could not have been more effusively complimentary to Kelly.