Tonight Donald Trump is holding a cynical counter-event to the Fox News Republican primary debate where he is insulting America’s veterans by using them as political props. He even admitted that he doesn’t really care about veterans when he walked out onto the stage and the first thing he said was “I didn’t want to be here.” Gee, thanks, Donnie. [And for the record, of the alleged six million dollars raised, four million came from one million dollar donations from four of Trump’s wealthy pals. That’s two-thirds of the total that Trump raised with four phone calls that he could have made at any time, but never bothered. So he didn’t need to stage this phony event at all]

That’s typical of his ego-soaked personality that is only concerned with what advances his interests. And it is expressed frequently in his Twitter feed. Just today there were a couple of tweets that deserve some special recognition due to their grotesque nature. These tweets are emblematic of Trump’s racism and misogyny. And they both attack Fox’s Megyn Kelly, proving that his claim that she had nothing to do with why he skipped the debate was an outright lie.

First there was this tweet that shows Megyn Kelly with Saudi Prince Alwaleed Bin Talal. It’s purpose is to create a negative association between Kelly and Fox News with Arab royalty, and a Muslim, as if that by itself were some mortal sin. Alwaleed is minority shareholder of 21st Century Fox, the parent corporation of Fox News. 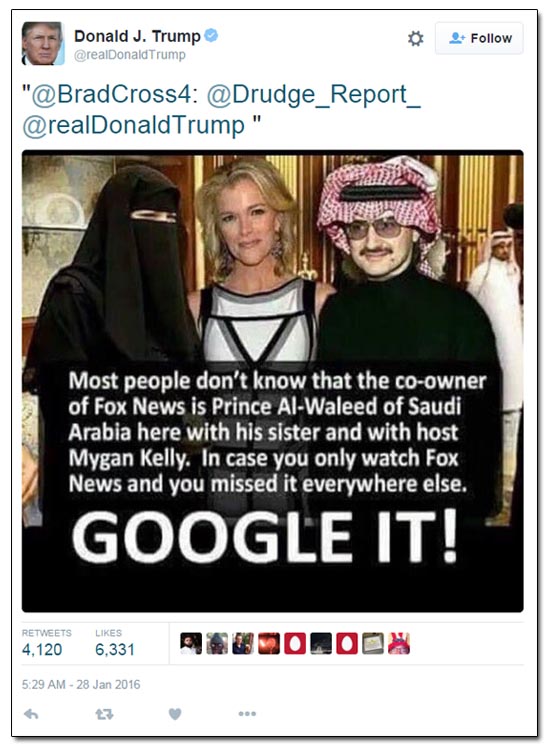 There are, however, a couple of problems with that tweet. First of all, it is a fake. Kelly was photoshopped, badly, into the picture. Another problem with it is that @BradCross4, who originally posted the picture, is a raging and unabashed racist whose twitter account is full of repulsive bigotry. Apparently that didn’t bother Trump as he retweeted it. That is something he does frequently. He recently retweeted another racist meme that made ludicrous assertions about African-American crime statistics. Then there was his retweet of an image by someone called @WhiteGenocideTM. It’s hard to pretend he didn’t know what that was about.

Finally, Trump’s complaint about Fox News having a business relationship with Alwaleed is hypocritical in the extreme. Trump has many such relationships with Muslims, which he often brags about. As one example Trump, bought the Plaza Hotel in Manhattan in 1988. After suffering serious financial difficulties he was forced to sell it just seven years later at a loss of nearly 40% to – yep – Prince Alwaleed Bin Talal. So in addition to being a huuuge hypocrite, this also reveals another example of his poor business skills.

[Update: Alwaleed replied to Trump’s tweet with one of his own saying “Trump:You base your statements on photoshopped pics?I bailed you out twice;a 3rd time,maybe?” Alwaleed noted the Plaza Hotel deal where he paid off Trump’s debt. He also revealed that he bought Trump’s yacht after it had been turned over to creditors]

The other tweet that Trump promoted today was this one that featured Megyn Kelly from an article in GQ. News Corpse reported on these photos at the time and how inappropriate they were for someone purporting to be a news professional. It not only diminished her as a journalist, but it demonstrated how Fox exploits the women they put on air as sexual objects. 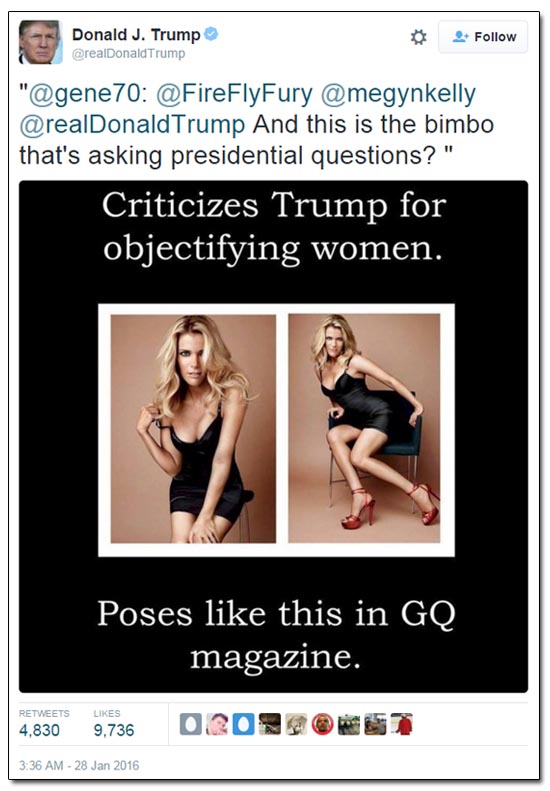 The problem with Trump weighing in on this is that it is blatantly hypocritical. The tweet refers to Kelly as a “bimbo” and, therefore, unfit to moderate a debate. However, Trump doesn’t seem to have the same opinion of his wife and daughter, whom he says are both businesswomen deserving of respect. Even though they both have their own photo spreads. 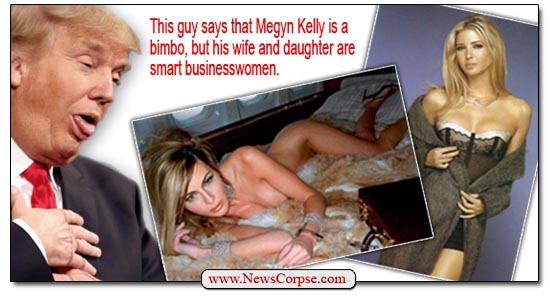 These tweets are just further evidence that Donald Trump is a boorish, hypocritical, bigoted cretin whose wealth has never enabled him buy an ounce of integrity or class. The fact that there are people who seriously regard this neanderthal as presidential material is a sad commentary on that small and repugnant sector of America. And don’t forget, Donald Trump wants to bang his daughter, as the video below makes clear.