Following the 2012 loss by Mitt Romney, the Republican National Committee conducted what they called an “autopsy” to establish what went so terribly wrong with a campaign that they thought they would win in a walk. After all, they were running against a president that they believed was a dismal failure on top of being a gay Muslim from Kenya who hated America. Their self-examination concluded that the GOP had fatally ignored the constituencies of color and that they would have to appeal to a much larger percentage of Latinos if they ever hoped to win a national campaign again. 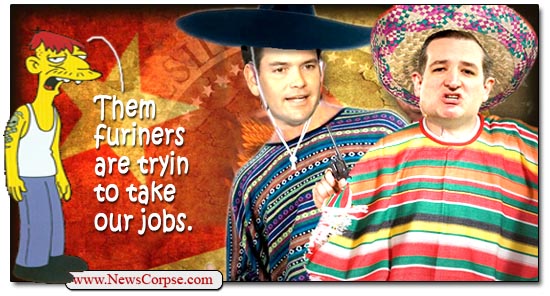 In 2016 the RNC is now confident that they have resolved that problem. As evidence of their progress Reince Priebus, the chairman of the party, rushed over to Fox News, the party’s PR division, and gleefully boasted about the diversity of the party’s leading candidates. He told Fox that the GOP is enjoying a high degree of enthusiasm and added that…

Priebus: The other big thing was, look, Ted Cruz, first Hispanic out of Iowa from a major political party. Marco Rubio, two out of our top three Hispanic. Where is the media on this? Right? This is a big deal.

It’s interesting that the party that has relentlessly lectured Democrats for “playing the race card,” and complains bitterly when Democrats show pride for historical firsts (like the first African-American or woman or Jewish president), is suddenly showing off their own alleged minority credentials. However, there are some pertinent facts that they are egregiously omitting.

First of all, while two of the top three GOP candidates in Iowa are indeed Hispanic, the third is Donald Trump – a brazenly racist hate monger who has referred to Latino immigrants as rapists and murderers. Trump has thoroughly alienated the Latino community and has even banished Latino reporters from his campaign events. And somehow he is still delusional enough to believe that he will win their votes.

Secondly, bragging about Cruz and Rubio as representatives of the Latino community really stretches the notion of representation. Both of them share the same repugnant views toward immigrants that define Trump’s bigotry. They want to build a silly wall. They want to deport millions of Latinos residents. They oppose Obama’s DREAMers initiative that allows young Latinos who came here as children, are in school or have completed military service, and have no criminal record, to remain in the U.S. They promise to repeal ObamaCare, which makes health insurance available to millions of Latinos. And they are on the wrong side of many more general issues that impact Latinos such as equal employment, minimum wage, education, and taxes.

Clearly none of the top three finishers in Iowa (or any of the other Republicans) are aligned with the needs and desires of the majority of Latinos. The GOP candidates with Latino names are no more likely to draw Latino votes than Ben Carson is to draw the votes of African-Americans.

Republicans must think that these voters are so stupid that they will vote against their best interests just because of a shared ethnicity. That’s not gonna work. Voters know when a candidate is going to fight for the things that matter most to them. That’s why black voters voted for Obama – not because he’s black. And that’s why Cruz and Rubio will never be able to trick very many Latinos into voting for them. But they’re still going to try, and the effort will only make them look more foolish and desperate.

One thought on “Playing La Raza Card: RNC Chair Brags That 2 of Top 3 In Iowa Are Hispanic”