For most of the presidency of Barack Obama a contingent of fringe dwellers have challenged his legitimacy to serve due to wholly unfounded accusations that he was not born in the United States. One of the most prominent and vocal of those critics was Donald Trump, who joined the nut cases demanding Obama’s birth certificate and then refused to concede that it was real when it was provided. 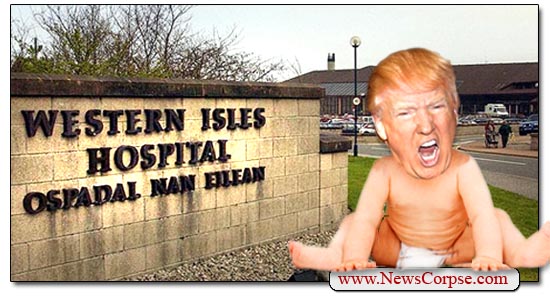 Trump was so obsessed with Obama’s birth status that he allegedly sent a team of investigators to Hawaii to get the goods on the phony president and proclaimed that the world “will be amazed” at what they found. Unfortunately, Trump has never disclosed the results of that investigation and has since refused to even talk about it. Amazing.

Not satisfied to stir citizenship controversies for just President Obama, Trump also raised concerns about the birth status of both Marco Rubio and Ted Cruz. He even threatened to sue Cruz in a tweet saying that “If @TedCruz doesn’t clean up his act, stop cheating, & doing negative ads, I have standing to sue him for not being a natural born citizen.”

This backstory makes the news that Trump’s questionable birth status could sink his own presidential ambitions even more significant. Records have been unearthed from a Scottish hospital that appear to document the birth of a baby boy to Mary Anne MacLeod, Trump’s mother, on June 14, 1946, the date of Trump’s birth. Anonymous sources from the Western Isles Hospital in Stornoway, Scotland claim to have the evidence of the birth and are preparing to make it available to the media.

Concurrent with those allegations is a story being researched for book by William MacDougal, an academic from Springfield E.S. with close ties to the MacLeod family. MacDougal conducted interviews with family members, including Mary Anne’s nephew Duncan MacLeod, who confirms that she had returned to Scotland in the Spring of 1946 after a falling out with Trump’s father Fred. It was there that she discovered that she was pregnant and later gave birth at the Western Isles facility. A Dr. Montgomery Scott was listed on the birth certificate as the attending physician. Dr. Scott’s former colleagues, however, refused to comment with one angrily dismissing reporter’s inquiries saying “I’m not the doctor, damn it.”

Upon hearing of the birth of his son, Fred Trump demanded that Mary Anne return to the United States and threatened to use his connections to revoke her citizenship status if she did not comply. Fearing that she might never again see her previous children with Fred, she bundled up little Donald and returned to the Trump family home in Brooklyn where the birth records of Donald were redrawn to indicate a New York delivery.

As this story unfolds it will be interesting to see how Trump responds to allegations that he suffers from the very same citizenship irregularities that he has directed at Obama and others. Will he submit to requests for his long form birth certificate? Will his followers continue to support him? Will there be legal complaints filed?

Since it is only April 1st, it is still too soon to have authoritative answers to these questions. But as the election proceeds, Trump will encounter increasingly stiff criticism and demands for clarification. Although, he continues to refuse to provide the tax returns that he once promised to make public, so his obstinate nature may prevail as he stubbornly declines to cooperate and simply insults his critics and attempts to change the subject.

And speaking of bombshell announcements…

7 thoughts on “Birther Bombshell: Donald Trump Was Born In Scotland And Is Ineligible To Be President”