The Wall Street Journal just published an editorial that might have been dismissed as an April Fool’s joke, except that it was published on March 30. It is the sort of delusional crackpottery to which conservatives resort when their denial overpowers what little common sense they have. 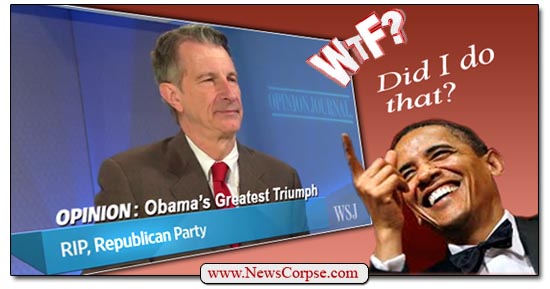 The article by Dan Henninger, the paper’s Deputy Editorial Page Director and a Fox News contributor, is fretfully titled “Obama’s Greatest Triumph: He is six months away from destroying both the Republican Party and Reagan’s legacy.” While the claim is one that stirs the promise of hope in every liberal, Henninger may be giving Obama more credit than he deserves. The truth is that the Republican Party may indeed be six months from destruction, but Obama has had little to do with it.

Henninger is employing the venerable rightist tactic of blaming Obama for anything that they deem undesirable. For instance, wingnuts on the right have blamed Obama for the bombing in Brussels, California’s drought, Ebola, and even Hurricane Katrina. He is blamed for high gas prices that hurt consumers, as well as for low gas prices that hurt oil companies. In the warped minds of conservatives there is no way that Obama can win.

And now the disintegration of the Republican Party is just another disaster caused by a president that the right believes is both an evil genius and a lazy incompetent. He’s working determinedly to destroy America while doing nothing but playing golf. The editorial begins with the premise that…

“Barack Obama will retire a happy man. He is now close to destroying his political enemies—the Republican Party, the American conservative movement and the public-policy legacy of Ronald Reagan.”

And how does Henninger arrive at this conclusion? By observing that the GOP has withered into a hollow shell of a party and that…

“With no party spokesman for conservatism, an ideological vacuum existed. Freelance operators filled it.”

The freelancers identified by Henninger are otherwise known as some of the leading figures of their party, including presidential candidates Ted Cruz and Donald Trump. Henninger doesn’t explain the dastardly scheme that Obama used to get Republicans to elevate these fruitcakes to their current status, but rest assured, it must have been as diabolical as it was brilliant. But that was only the beginning. Obama’s plots conspired to turn the Republican Party against itself, even utilizing reliably right-wing think tanks and media to do the dirty work.

“They also included a movement to purge and cleanse conservatism, led by groups such as Heritage Action and by talk radio hosts. Together they conjured an internal enemy—the Republican Establishment.”

Once again there is no explanation for how Obama managed to get the ultra-rightist Heritage Foundation, Rush Limbaugh, et al, to turn their fire at the so-called “Republican Establishment,” which in reality is no different than what is regarded as the Republican outsiders like the Tea Party. They are all of the same hive mind politically, and advocate for exactly the same agenda.

Nevertheless, Henninger’s proposition that the turmoil in the GOP was brought about by some wizardry on the part of Obama was made even more devious by the President’s ability to keep his fingerprints off of the plan. As Henninger describes it…

“With his Cheshire Cat grin, Barack Obama faded into the background and let the conservatives’ civil war rip. […] The anti-establishment offensive created a frenzy faction inside the Republican base. And of course, it produced Donald Trump.”

Now that is the ultimate praise from the conservative columnist. Taking credit for saddling Republicans with Donald Trump would be a feather in the cap of any Democrat. It would be like threading the Deathstar needle in an X-Wing Starfighter to blow it to smithereens. Obama must truly be a Jedi Master.

All kidding aside, the desperation in this editorial to indict Obama for crimes against the GOP is hilariously obtuse. Responsibility for the Republican Party’s destruction lies solely with GOP politicians, pundits, and voters, who encouraged the foolishness of the Tea Party malcontents to screech their unfocused and incoherent anger at anyone who sought to behave reasonably or to conduct the work of government. It wasn’t Obama who unseated the GOP House Majority Leader. And it wasn’t Democrats who primaried veteran Republican members of Congress. And any clear-eyed observer knows that Donald Trump was the inevitable consequence of their festering rage.

Henninger whines that the GOP’s “bizarre” response to the Obama administration produced a result wherein “the Republicans decided to destroy each other.” That’s true, but it wasn’t Obama who got them to become so bizarre. That’s an honor that they can only award to themselves. And now that most of them are horrified by the prospect of Donald Trump becoming their standard bearer, they are struggling to avoid accountability and to lay the blame at the feet of the President who has been the most consistent victim of their madness. But that is only more proof that they are still suffering from an acute case of denial. And there is no sign that a cure is on the horizon.

The Republican Party may very well be six months away from being destroyed. And if it is, the credit belongs to the party and the conservative media that has been deceiving their constituents for the past eight years (or more). At least RNC Chairman Reince Priebus was honest about it when he said that “Republicans don’t exist as a national political party if we do not win in 2016.” To which America is saying “You promise?”

4 thoughts on “If Only: WSJ Says Obama Is Six Months Away From Destroying The Republican Party”