Keith Ablow, a member of the Fox News Medical A-Team, has never been shy about taking absurd positions that make a mockery of the psychiatric calling that he pretends to represent. Some of his past adventures in malpractice include his charges that President Obama was waging psychological warfare on the American people, that Newt Gingrich was honorable for being unfaithful to multiple wives, and my personal favorite, he actually praised the Unabomber’s sociopathic philosophy. And now he is applying his remote diagnostic “skills” to the presumptuous Republican nominee for president, Donald Trump. 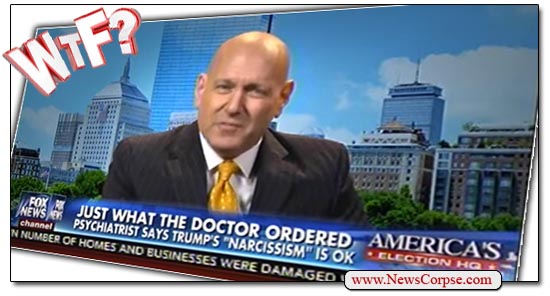 Ablow was a guest on Fox & Friends to explain his latest theory on the psychology of leadership. He was introduced by host Steve Doocy who said:

In Ablow’s view, Trump’s narcissism is an asset that will benefit the nation that he says is “emerging from eight years of self-loathing.” Furthermore, he asserts that Trump’s “narcissism is deeply entwined with a love for America.” According to Ablow’s perverse logic, narcissism is pretty much the same thing as patriotism. This is a concept he expanded on in an op-ed for the Fox News website. Ablow associated Trump’s self-love with “loving his freedom to speak bluntly, in loving his freedom to own property…”

However, what Ablow is describing is not narcissism. his remarks seem to suggest that he has no idea what the term means. It’s possible to appreciate free speech and property ownership without being a narcissist – as most Americans can tell you. The Mayo Clinic defines Narcissistic Personality Disorder as…

“…a mental disorder in which people have an inflated sense of their own importance, a deep need for admiration and a lack of empathy for others. But behind this mask of ultraconfidence lies a fragile self-esteem that’s vulnerable to the slightest criticism.”

By that definition Trump appears to be a textbook example of a narcissist. He never stops talking about how awesome he thinks he is (even when it’s entirely undeserved) and how much he imagines everyone loves him. And his aversion to criticism is revealed in every hostile (and juvenile) tweet he posts whenever someone dares to be less than totally devoted to him.

What’s more, Ablow ignores negative traits, such as lacking empathy, that make narcissists wholly unfit for leadership roles. Their agenda would always be focused on how it benefits them, without regard for anyone else. The best leaders would actually reverse those traits and make the pursuit of helping others their primary objective.

Ablow has demonstrated that he qualifies as a loyal Trump toady. In his op-ed he praised Trump effusively saying that “Donald Trump is John Wayne. Donald Trump is Babe Ruth.” That praise is itself revealing. Notice that Ablow likened Trump to an actor and an athlete rather than to governing icons like Thomas Jefferson or Abraham Lincoln. And he has been bitterly opposed to President Obama for years, even referring to him as a toxic virus from which our children must be immunized.

But Ablow has also demonstrated that he does not qualify as a reputable psychiatrist. This isn’t just because he doesn’t know what a narcissist is, or because his deep hatred and bias against Obama taints his analysis of everything he says. It’s because he uses his personal prejudice as a cudgel to attack those with whom he disagrees. And he is so determined to insult and defame his perceived enemies that he abandons all reason and logic. That’s why he can exalt Donald Trump for being a narcissist, while disparaging Obama for the same thing, as he did a few years ago. When Obama was running for reelection in 2012, Ablow condemned him saying:

“We’ve never had a self-regarding narcissist quite like the Oval Office’s current occupant.”

At the time, Ablow considered that an argument against voting for Obama’s second term. But now he is looking forward to having Donald Trump, a narcissist of his liking, in the Oval Office and arguing that his narcissism is an affirmative reason to give him your vote. That’s just crazy. I’m tempted to cite the old biblical proverb “physician, heal thyself,” but in Ablow’s case I wouldn’t recommend it. His psychological infirmity is so profound that he should make the effort to find someone who isn’t a quack.