It is now indisputable that the most maniacally demented crackpot on Fox News (since the excommunication of Glenn Beck) is the psychiatric member of their Medical A-Team, “Doctor” Keith Ablow. This ODS (Obama Derangement Syndrome) sufferer regularly violates the Principles of Medical Ethics of the American Psychiatric Association (Section 7.3) by forming medical opinions about people he has not examined and discussing them without approval. 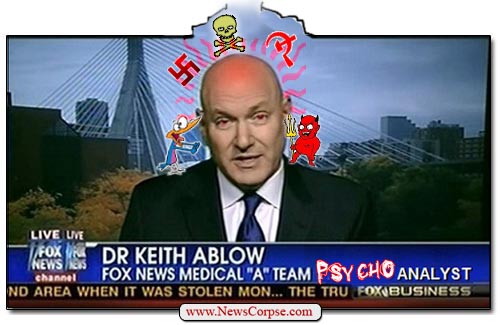 Ablow has previously manifested such acute symptoms as advocating the health benefits of gun ownership and political advantages of marital infidelity. He has even praised the Unabomber. Most recently he has taken to accusing President Obama of having a “victim” mentality that has turned him into “a force that is disempowering Americans.” The ravings of Ablow are rapidly devolving into what can only be described as avant-garde comedic performance art. It is such over-the-top idiocy that it can’t possibly be taken seriously.

Nevertheless, Ablow has a captive audience in the Fox News congregation of Tea-soaked dimwits. His latest op-ed for Fox has the alarming headline: “How to immunize our kids against Obama’s victim mentality.” It’s his third installment in the “victim mentality” series. He leads off by regurgitating a string of mythical affronts that Ablow’s imagination has distilled into pure lunacy. For instance, he brings up the old “you didn’t build that” canard that Republicans deliberately misconstrued. He falsely claims that Obama believes that “individuals, even if they have committed no crimes, shouldn’t own firearms.” He raises the IRS pseudo-scandal that in reality included both liberal and conservative groups. Clearly Ablow is using this bizarre psychoanalysis in an attempt to exhume phony political attacks that didn’t work the first ten times their were trotted out.

In his previous chapter, Ablow asserted that if it wasn’t for Obama’s victim psychosis “dissolving the will of countless Americans,” there would be no poverty in America. But the new chapter is addressing the far more ominous danger that an Obama Virus poses to our children. And once again, Ablow assigns to Obama an almost supernatural power to impact whole societies by virtue of his omnipotent will:

“So it is time to immunize our sons and daughters against the president’s psychologically toxic rhetoric, which has the capacity to destroy the self-esteem of a generation of young people.”

Yikes! Sounds like the spell of Lucifer spreading across the nation like a poisonous cloud, enveloping the innocent and dooming mankind’s future to ruin. And Ablow’s response to this impending horror is an ingenious three step plan to shield our kids from Obama’s voodoo magic.

In short, Ablow’s advice is for patriotic parents to convince their kids that the President is a beastly liar who is trying to sap their free will and self-worth. Sure, that won’t traumatize any young’ns. And they need to be made aware of Obama’s determination to beget “the subtle, chronic, steady erosion of their belief in themselves.” Well, Ablow did publish this on the day before Halloween, so perhaps that’s why he is trying so hard to frighten the children. Or perhaps he is just dickwad who thinks he can peddle his paranoid theories about why the otherwise good people of America voted twice for such a monster. Ablow says…

“At the time we elected this president, we were doubting ourselves. We had been traumatized by the attacks of 9/11 and too many of us wondered if we had done something to deserve the hatred of others. So we elected a man who symbolized all that self-doubt and, because he had resented America his whole life, he made us doubt ourselves even more. Tell your children all this.”

Not a single wiord of that made the slightest bit of sense. First of all, we didn’t elect Obama until seven years after 9/11. The first post 9/11 election returned George W. Bush to the White House. So should he be the target of Ablow’s wrath? Secondly, what psychiatric principle asserts that a population of citizens traumatized by terror would seek to console themselves by electing someone they regarded as resentful of the nation they loved?

It’s a theory that only a madman, obsessed with showering hatred on the object of his disgust, could seriously propose. And that is a pretty sound psychoanalysis of Keith Ablow and many of his colleagues at Fox News. They are so profoundly paranoid and seething with contempt that it’s a wonder they can tie their shoe laces without strangling the cat. And now they fear a virus outbreak from the White House with the potential to turn our kids into zombies if they aren’t warned that all their leaders are out to get them. And if you think that they aren’t building a case that Obama is striving to become the messianic cult master, then you haven’t read this yet.