Remember that time when Donald Trump was so afraid of Megyn Kelly that he ditched a Fox News debate and scampered off to host a fake telethon for veterans? The event that he deliberately scheduled to compete with the televised debate turned out to be nothing more than another self-serving Trump stump speech. The only difference was that he shamelessly exploited wounded veterans as campaign props and proudly announced that he had raised six million dollars for their benefit. 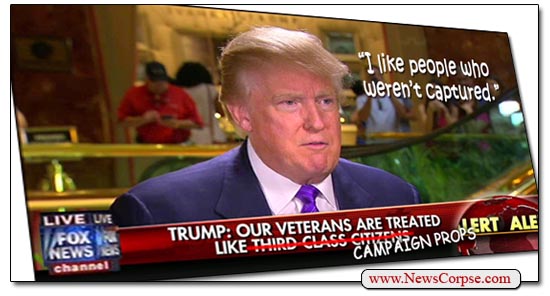 Months later, reports by CNN, the Wall Street Journal, and others, exposed Trump’s fraud by contacting the veterans groups that he identified as the recipients of his alleged largess. Turns out that only a fraction of the six million dollars had found its way to the intended beneficiaries. His campaign could not, or would not, account for the missing funds, referring reporters to his website where there was no information about the disbursement of the donations.

Now the plot is thickening. Trump’s campaign manager, Corey Lewandowski, was asked about the donations by the Washington Post and now claims that the amount raised was less than previously stated. He said that he didn’t know what the correct amount was or how much had been disbursed. Then he attempted to disavow entirely the claims of the telethon’s success. Referring to Trump’s prior boasts, Lewandowski said that…

“What he said was, ‘We hope to get $6 million.’ He said this at an event where we were trying to get money. It was a best guess. That was his goal. His goal was to get somewhere around $6 million.”

Not exactly. Trump made a point of bragging on several occasions that he had raised six million dollars. What’s more, his website still has a page that makes the same claim. [Note: That page has since been deleted, but it can be seen here]

“Mr. Trump personally contributed $1 million dollars to the cause and raised an additional $5 million before the one-hour event concluded, totaling more than $6 million dollars.”

Contrary to Lewandowski’s new characterization, that is not an expression of hope, it is stated as a fact. In addition, seeking to further glorify himself, Trump made specific reference to his own alleged generosity. However, since he refuses to release any of his tax returns there is no way to verify the truth of that claim either. And Trump’s unscrupulousness has not gone unnoticed by actual veterans. Paul Rieckhoff, founder of Iraq and Afghanistan Veterans of America, told the Post…

“No matter how you cut it, that’s just shady. If he was going to make it right, a couple of weeks before Memorial Day would be a good time to do it. It behooves him, not just politically but ethically, to come forward and account for this money.”

Lewandowski attributes the donation shortfall to unnamed donors who made large pledges that they later welshed on. So he’s blaming Trump’s friends who reneged on their promises to help the veterans. Those are the same people that Trump is always saying will be part of his administration.

Of course, Trump could make up the difference himself if his interest in the vets were genuine. After all, he has already loaned his campaign over $40 million, so what’s stopping him from kicking in another couple of million for the veterans he claims to love? Nothing but his selfishness and personal greed. It is not without cause that he is known as the least charitable billionaire.

3 thoughts on “Veterans Shortchanged And Lied To By Donald Trump Re: $6 Million In Donations”