The Fox News community website, Fox Nation, is often a welcoming place for bigots and hate mongers. Their history of tolerating repulsive comments, on a site that claims to have moderators keeping the discourse civil, is testimony to their intention to embrace and encourage right-wing hostility (see The Collected Hate Speech Of The Fox News Community). But the latest episode of wingnut spleen-letting may surpass anything that has come before it – and that’s saying something. 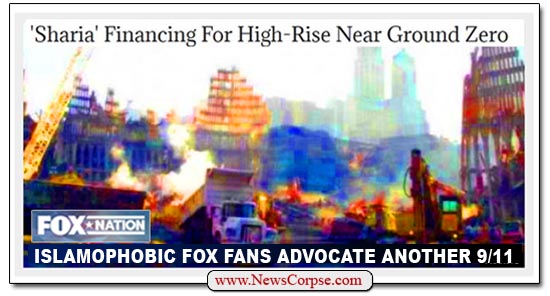 The article that incited the heinous comments below was a report in the New York Post (a corporate cousin to Fox News) that a Muslim developer was preparing to build a 43-story luxury condominium tower and Islamic cultural museum in lower Manhattan. The Post’s article was featured on Fox Nation with a somewhat more ominous headline that invokes Sharia Law. That’s part of what set off a rash of rhetorical racism, along with certain details that were predictable triggers for Fox’s intolerant audience.

First of all, the site of the development was once proposed as a site for an Islamic cultural center that Fox News branded as the “Ground Zero Mosque,” despite the fact that it was neither a mosque, nor at 9/11’s Ground Zero. Fox, along with a cacophony of conservative pundits and politicians, turned the issue into a bitter debate that fed on the bigotry of the anti-Muslims on the right. As a result, the center was never built. Now the same developer, Sharif El-Gamal, is hoping to complete a project that will bring jobs and commerce to the area. What a monster!

Secondly, the Fox brigades are disturbed by the method of financing for the project. Consistent with Islamic principles, El-Gamal sought financing from institutions that avoid the collection of interest on loans. And not surprisingly, the mention of “Sharia-compliant financing” in the article set off alarms at Fox Nation. However, there is nothing unsavory about this method of financing. In fact, it contains protections that arguably make it a more ethical way to deal with loans. [Here is a summary explanation of Sharia-compliant banking] Also, it is not a law and is no more an intrusion on American laws than keeping Kosher is for Jews.

Finally, the Fox Nationalist bigots were generally objecting to the fact that the project is headed by a Muslim (It’s a good thing they don’t know that the architect is a Mexican-American). Since they regard all Muslims as terrorists, they are certain that there is some ulterior motive that involves the murder of innocent Americans. And their response to that is to suggest replicating the tactics of terrorists themselves. They see no irony in advocating the sort of destruction that would result in countless fatalities throughout the vicinity, including the first responders who would rush to the scene to try to save lives. Here is sampling of the comments attached to the Fox Nation article:

Fox Nation Hankering For Another 9/11: 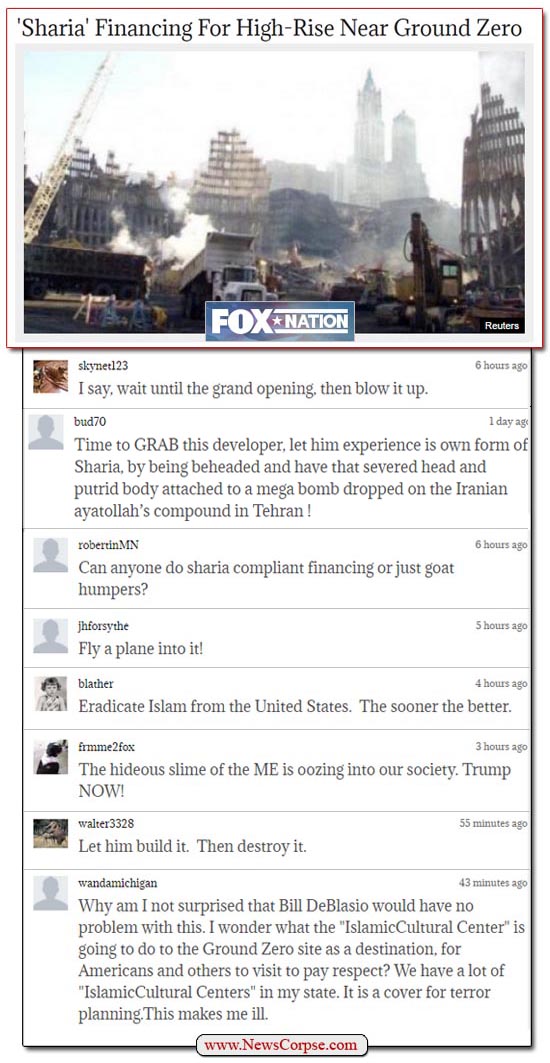 No commentary is needed for the nauseating remarks by the hateful Fox Nation mob. However, it is worth noting that the editors at Fox chose a photo of the devastation at the site of the World Trade Center, which has nothing to do with the new development or the article about it. They might have chosen to show a picture of the proposed high-rise, but then that wouldn’t have manufactured a controversy that would set their dimwitted readers’ blood to boil, which is Fox’s highest priority.