Politics has always been a rough and tumble game with mudslinging and character attacks that test a candidates endurance. And while it often diverts from the issues that voters care about, those types of tactics are usually short-lived distractions and the public debate generally returns to the primacy of a candidate’s policies and proposals. 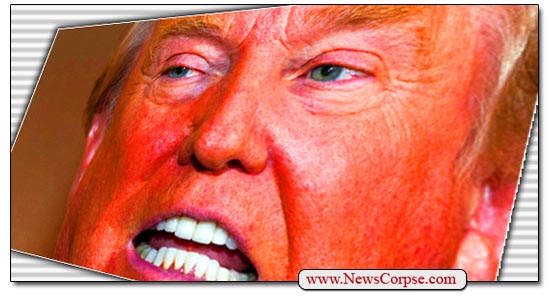 But this year it’s different. One of the candidates is a former reality TV game show host with a long history of making tabloid melodrama the centerpiece of his celebrity. Donald Trump is a rich, spoiled, thrice married playboy who flaunts his infidelities, and isn’t shy about slandering anyone he perceives as an enemy. And he has brought his crass demeanor and inflated ego to his candidacy for president.

It is precisely because Trump is so ignorant when it comes to the pressing matters of state that he needs to rely so heavily on smear campaigns and juvenile name-calling. It has been nearly a year since he announced his entry into the race and he is no more knowledgeable today than when he began. Consequently, we can expect to see a continuation of the empty-headed insults and bullying that are the hallmarks of Trump’s campaign. And today there were two frightening examples of what the next five months are going to look like on the campaign trail.

The first came in the form of a Trump video dredging up an old and discredited allegation about Bill Clinton. The accuser, Kathleen Willey, had told her story to the Independent Counsel investigating Clinton back in the early 1990’s, as well as the FBI, who dismissed it as inconsistent, unverified, and riddled with lies. As Media Matters reported, she also told it to conspiracy fruitcake Alex Jones and Donald Trump.

The video Trump is now distributing shows Willey recycling her assault charges with no more evidence today than she had twenty-three years ago. The difference is that now she has Donald Trump paying her to repeat this rotting pile of salacious gossip. Although it shouldn’t surprise anyone that Trump, a still festering birther, would hype such obvious garbage. Willey has also accused the Clintons of killing her husband and her cat.

The second steaming heap was reported by the Washington Post and also attempts to reanimate a scandal that has been dead for a quarter of a century. Trump spoke to the Post today and unprompted resurrected the ghost of former White House aide Vince Foster. Foster committed suicide in 1993, which led to a flurry of ludicrous conspiracy theories mainly accusing Bill and/or Hillary of murdering him.

So today Trump told the Post that he considered Foster’s death to be “very fishy.” Continuing, Trump said of Foster that “He had intimate knowledge of what was going on. He knew everything that was going on and then all of a sudden he committed suicide.” Trump never reveals what might have been going on that would make him a target for assassination. He also neglects to mention that Foster’s death “was ruled a suicide in investigations conducted by the United States Park Police, the Department of Justice, the FBI, Kenneth Starr and Congress.”

The fact that Trump is bringing up these bizarre and stale smears of yesteryear shows that he intends to drag the campaign down to levels never seen before. He will continue to avoid substantive issues like national security, economics, healthcare, and equality because he simply doesn’t comprehend any of them. So prepare to be inundated with assertions that Hillary Clinton is a lizard-person from outer space who is plotting to devour your children. Because that’s as close to reality as Donald Trump is capable of getting.

And what’s really sad is that Trump’s glassy-eyed followers won’t see anything wrong with this style of campaigning. They don’t care if he talks about ISIS or Martians as long he says he’s gonna obliterate them in the first week of his presidency. And they certainly don’t care if he lies through his capped teeth as he has been doing for the past year (see the Trump Bullshitopedia). His fans love nothing better than the tales of murder and lust that are more at home in the cheesiest of soap operas. So that’s what they will get and most of it will be happily delivered by Fox News. They will never ask him to demonstrate any of the intelligence or ability to govern the most powerful nation on Earth – Lucky for him.