The sad reality of having to cover yet another incident of mass gun violence in America is made all the worse by the revolting political opportunism of the knee-jerk hate mongers at Fox News. In the early hours of Sunday morning in Orlando, Florida, a gunman entered a nightclub with an AR-15 and other weapons and murdered fifty innocent people, wounding more than fifty others. It’s a tragedy that calls for the uniting of all Americans against the insanity that produces these maniacs. 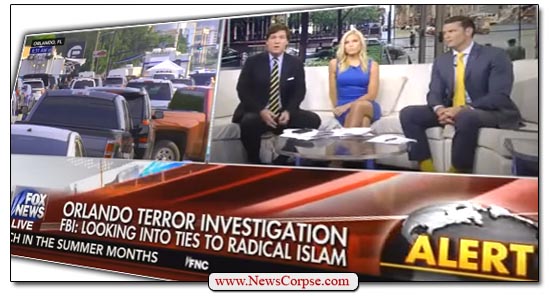 However, instead of seeking the unity and solace that the nation so desperately needs at times like this, Fox News ventured off into a flagrantly biased political diatribe against President Obama (video below). Fox and Friends co-host Tucker Carlson was interviewing an author and alleged expert on terrorism when he asked the following question:

“Doesn’t the politicization of all of this, the relentless lying by the administration about the Islamic terror threat we face make it harder for people to want to step forward and say what they see?”

Carlson’s question is so rife with hypocrisy and hatred it is difficult to know where to begin. First of all, it is Carlson who is responsible for “the politicization of all of this.” Most of the people in positions of authority are withholding comments until more facts are known. The only statement from the administration was an acknowledgement of the horror of terrorism, committment to its defeat, and expressions of condolences. Carlson’s question is itself political in nature and aimed at maligning the president he hates.

Secondly, there is absolutely no evidence of “lying by the administration about the Islamic terror threat we face.” That’s a scurrilous fabrication straight from the warped mind of an anti-Obama bigot. The Obama administration has forthrightly addressed the terrorist threat and has done more to combat it than any other president in history. Under his direction the American military has killed or captured hundreds of terrorist leaders and operatives, including Osama Bin Laden, a task that President Bush was unable to achieve for seven years.

For the host of an alleged “news” network to make such reprehensible comments, only hours after the slaughter, while the victims and their families are still grief-stricken, is not unusual for Fox News. They have engaged in similar politicization of tragedies as disperse as Benghazi, Paris, Aurora, Newtown, and San Bernardino. It didn’t make any difference if the crimes were related to terrorism or not. They were always somehow the fault of President Obama.

Fox News is brazenly catering to the hatred of their audience. This is all to common for Fox as documented in The Collected Hate Speech of the Fox News Community. All it takes is brief glance at the comments on Fox’s website to see that the political obsessions and biases expressed by Fox anchors is mirrored by their viewers. These are just a few of the vile outbursts on their Orlando article: 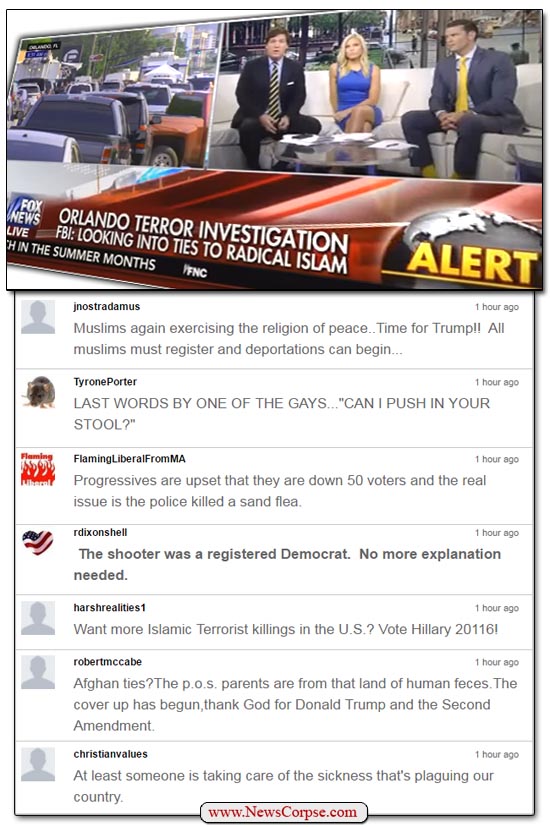 Watch Tucker Carlson and his nauseating friends on Fox News: