There, I said it three times. Is it gone yet?

In the childish imagination of American conservatives the only reason that terrorism still exists is that President Obama and other Democrats have failed to utter the magical incantation “Radical Islamic Terrorism.” The Wingnut Republican Tabernacle and the Pharisees of Fox News have devoutly concluded that this mantra is the key to defeating groups like Al Qaeda and ISIS. They believe that it is rhetorical kryptonite to terrorists. And then they wonder why we think they’re stupid. 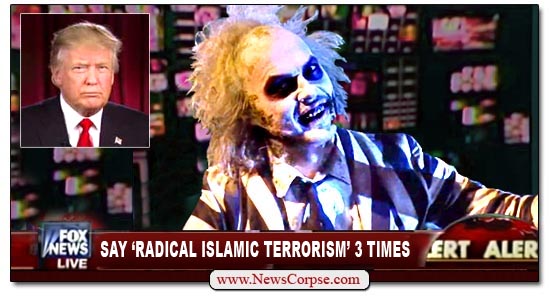 What we have here is the widespread adoption of the fabled “Reverse Beetlejuice Doctrine” wherein you shout “Radical Islamic Terrorism” three times and ISIS disappears. It’s clearly an obsession with these strategery geniuses. What’s more, they are convinced that babbling a few words of sorcery is a more effective weapon in the fight against terrorists than actually fighting terrorists. So even though as Commander-in-Chief President Obama disposed of Osama Bin Laden and eliminated thousands of terrorist operatives, including many of their leaders, he can’t possibly be serious about the mission until he chants that sacred three-word spell. Never mind the reports from the real world about actual military progress:

The Pentagon says it has killed about 26,000 ISIS fighters altogether, cut into the group’s cash flow, and driven the terrorists out of 40 percent of the land the organization once controlled. The population living under ISIS’s brutal reign has dropped from 9 million to 6 million people. U.S. strikes have killed several top ISIS strategists, and there are reports that ISIS fighters are retreating wherever they’re attacked, rather than fighting as fiercely as they once did.

And yet, draft dodgers like Donald Trump, who have no experience whatsoever in national security or counter-terrorism, continue to insist on adherence to a vapid slogan they’ve elevated to scripture. In a tweet shortly after the Orlando massacre was reported Trump asked:

“Is President Obama going to finally mention the words radical Islamic terrorism? If he doesn’t he should immediately resign in disgrace!”

Those are the sort of deep thoughts that populate the mind of a man who when asked who he speaks to for advice on foreign policy responded that “I’m speaking with myself, number one, because I have a very good brain and I’ve said a lot of things.” It’s the same man who immediately after hearing the news of the gruesome shootings rushed to Twitter to congratulate himself – twice (here and here) for being right about his proposal to ban all Muslims from entering the country. Apparently his “very good brain” missed the fact that the shooter was an American citizen born in New York.

And set aside the fact that Trump is a confirmed birther who believes that Obama should resign in disgrace for being a Kenyan who faked his American citizenship. Now his first response to the worst mass shooting in american history is to taunt the President for not saying “Radical Islamic Terrorism.” I can’t help but wonder what Trump and his ilk think would change if the President humored them and said the three little words (which used to be “I love you”). Would there be even one more life restored or one more terrorist removed from the battlefield? Of course not. Yet Trump spent the majority of his first post-Orlando speech preaching the “Radical Islamic Terrorism” gospel as if it had some relevance to solving the problem.

On the other hand, there are concrete reasons for declining to say “Radical Islamic Terrorism” or to otherwise refuse to associate the entire Muslim faith with the acts of violent extremists. We have legitimate concerns regarding our ability to form coalitions with the Muslim nations in the Middle-East whose cooperation is required to prevail against ISIS. That objective is not helped by demeaning their faith. But it’s more than that. By accepting the terms and definitions of the terrorists, Republicans, Fox News, et al, are acting as the PR department for the terrorists who desperately aspire to be regarded as the legitimate voice of Islam. Why are people like Trump insisting on granting the terrorists that victory?

When you look at who is for or against directly tying the terrorists to Islam you’ll discover a set of alliances that is enlightening. Those is favor of connecting those dots are the terrorists themselves, Fox News, and the Donald Trump faction of the Republican right. On the other side is President Obama, religion and terrorism experts, and the vast majority of the world’s Muslims who, we must not forget, are also the vast majority of the victims. So the real question here is why is Donald Trump, the GOP, and Fox News on the same side as the terrorists in an effort to brand their heinous activities?

Conceding that terrorism is the way of Islam amounts to an acceptance of the terrorists demands. It is a form of appeasement that rewards them with precisely what they seek: religious legitimacy. And the Trump Crusaders are playing into their hands. They are, in effect, supporting the goals of the terrorists.

One of the arguments frequently proffered to assert that Islam and terrorism are inseparable is that the terrorists call themselves Muslims. By that logic they would also have to argue that Christianity and terrorism are inseparable because right-wing militias, the KKK, and abortion clinic bombers call themselves Christian. But don’t expect to hear that from tunnel-blind right-wingers. Their only interest is in spreading irrational hatred and employing fear to gain power. Sounds something like terrorism, doesn’t it?