President Obama gave an address today that covered the tragic events in Orlando, Florida on Sunday, as well as an update on the fight against terrorism. The speech was remarkably similar to my article yesterday “Return Of The Reverse Beetlejuice Doctrine: Say ‘Radical Islamic Terrorism’ Three Times.”

After offering condolences to the victims and their families, Obama gave an accounting of the progress being made in the fight against ISIL and other terrorist organizations and reiterated our objective in the fight saying resolutely that “Our mission is to destroy ISIL.” 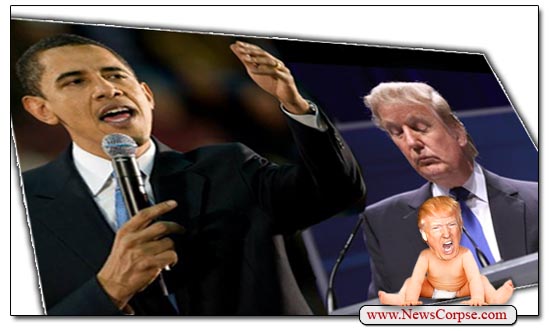 While partisans on the right are constantly demonstrating their faltering patriotism by declaring that America is losing the war on terror, the facts enumerated by the President prove that the opposite is true. The evidence is in the significant losses of the terrorist’s leadership and foot soldiers and the shrinking geography and area of influence that terrorists control.

Obama covered all of that in detail. However, he also took some time to put to rest the absurd obsession that rightists have with the phrase “radical Islamic terrorism” saying that “there is no magic to the phrase.” Nevertheless, and contrary to all reason, it has become an acute fetish with Republicans who hold that the mere utterance of the phrase will magically dissolve ISIS into the ether. Obama shot that down with eloquence and intelligence. He began with a direct hit:

“For a while the main contribution of some of my friends on the other side of the aisle have made in the fight against ISIL, is to criticize this administration, and me, for not using the phrase “radical Islam.” That’s the key they tell us. We can’t beat ISIL unless we call them radical Islamists.”

“What exactly would using this label accomplish? What exactly would it change? Would it make ISIL less committed to trying to kill Americans? Would it bring in more allies? Is it a military strategy that is served by this? The answer is “none of the above.” Calling a threat by a different name doesn’t make it go away. This is a political distraction.”

Indeed it is. And that is likely the goal of Obama’s critics who callously use this issue for political gain and as a cudgel against the President they never regarded as legitimate. Obama answers those who call for him to recite the magic phrase with a simple and logical observation:

“Not once has an adviser said, ‘Man, if we use that phrase, we are going to turn this whole thing around.’ Not once. So someone seriously thinks that we don’t know who we are fighting? If there is anyone out there who thinks we are confused about who our enemies are, that would come to a surprise of the thousands of terrorists we have taken out on the battlefield.”

“If the implication is that those of us up here and the thousands of people and the country and around the world who are working to defeat ISIL aren’t taking the fight seriously, that would come as a surprise to those who have spent these last seven and half years dismantling Al Qaeda in the FATA for example, including the men and women in uniform that put their lives at risk and the special forces that I ordered to get Bin Laden that are now on the ground in Iraq and Syria.”

And then Obama turned his attention to the person who is currently the most prominent presidential troll on this subject.:

“They know full well who the enemy is. So did the intelligence and law enforcement officers who spent countless hours disrupting plots and protecting all Americans. Including politicians who tweet and appear on cable news shows. They know who the nature of the enemy is.”

Politicians who tweet? Obama went on to state that his reasons for not using the magic phrase have “nothing to do with political correctness and everything to do with actually defeating extremism.” He correctly notes that the terrorists want to make this a war between Islam and America, that they want us to validate them as the legitimate voice of all of the world’s Muslims. But if we fall into that trap, the President said, “we are doing the terrorists work for them.” He warned that “this kind of rhetoric and loose talk and sloppiness” represents a dangerous mindset, one that he recognizes in Donald Trump:

“We now have proposals from the presumptive Republican nominee for President of the United States to bar all Muslims from immigrating into America. You hear language that singles out immigrants and suggests entire religious communities are complicit in violence. Where does this stop? […] Do Republican officials actually agree with this? Because that’s not the America we want? It doesn’t reflect our democratic ideals. It won’t make us more safe, it will make us less safe.”

In closing, Obama recalled that our country has made mistakes in the past “when we acted out of fear and we came to regret it.” He made an impassioned plea to uphold the values that make America worth fighting for:

“This is a country founded on basic freedoms, including freedom of religion. We don’t have religious tests here. Our Founders, our Constitution, our Bill of Rights, are clear about that. And if we ever abandon those values we would not only make it easier to radicalize people here and around the world, but we would have betrayed the very things we are trying to protect: The pluralism, the openness, our rule of law, our civil liberties. The very things that make this country great. The very things that make us exceptional. And then the terrorists would have won, and we cannot let that happen. I will not let that happen.”

Republicans have made their choice for a candidate who babbles in platitudes and hate speech; who has demonstrated a profound ignorance of the most pressing issues; and who has no respect for the truth (see the Trump Bullshitopedia). But America still has a choice to make and, if they are paying attention, it will be an easy one. No matter what anyone thinks about Hillary Clinton, the prospect of a Donald Trump presidency should be enough incentive to vote Democratic straight down the line.