With the conclusion of the FBI’s investigation of Hillary Clinton’s emails, clearing her of legal wrongdoing, partisans on both sides are spinning this issue to their respective advantage. While FBI Director James Comey said plainly that there was no “evidence that Secretary Clinton or her colleagues intended to violate laws,” Republicans chose to malign his reputation during nearly five hours of questioning in a congressional hearing that proved nothing. 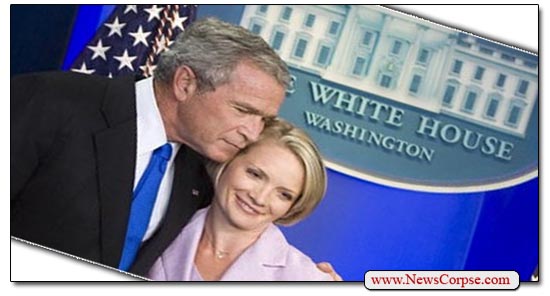 Throughout this matter, one of the most vocal critics of Clinton was a Fox News co-host of The Five, Dana Perino. She embarked on an extended Twitter tirade yesterday beginning with an introduction to a multi-tweet rant:

Would you allow me a bit of a rant on the Comey/HRC email story? Because I'm stewing. So here goes…

That was the opening for another twenty or so tweets about how dearly she appreciated the opportunity to work for the White House and how seriously she took her job. Each tweet contained an implied swipe at Clinton who she cast as not sharing her respect for the position. Perino sought to paint herself as having no political biases, she was just there to serve America:

I never thought of being at the WH as being there just for the Republicans. The party existed, it was important, but I was there for the USA

That, of course, was utter bullcrap. She was the press secretary for a starkly partisan administration that sharply divided the America people. There was a sentiment within the Bush realm that “you are either with us or you are with the terrorists.” Then Perino herself baselessly accused Comey of having a partisan double standard wherein he would have indicted a Republican under the same circumstances.

However, the most absurd part of this diatribe came when Perino referenced the time when she had to defend the Bush administration from charges of a cover up when they disclosed that two years of emails – more than five million – had been forever lost.

And for those who point to stories about 5 m missing emails in the Bush admin, I refer to my rant explaining this over and over

It is not at all the same – plus the emails were found – and there was no intent to deceive. So stick a sock in it on that one.

First of all, socks notwithstanding, Perino neglected to actually refer to any prior explaining rant. Secondly, if the emails were found (and that has not been established) it wouldn’t prove that there was no intent to deceive, only that the attempt at deception might have failed.

Flashback to April of 2007. The Bush administration was in the midst of dual scandals regarding: 1) the outing of Valerie Plame, a covert CIA agent whose identity was deliberately compromised as payback for her husband’s criticism of the Bush lies that led to the invasion of Iraq, and 2) the unethical firing of eight federal attorneys for politically ideological reasons. Additionally, there were questions about Karl Rove improperly using a Republican National Committee e-mail account that the White House later said disappeared.

So contrary to her assertion that it wasn’t the same, virtually every element of it is matched perfectly, There is classified information that was compromised, albeit in this case it was deliberate and it endangered the lives of covert CIA operatives. There were also improper political motivations in attempting to clean the Department of Justice of any attorneys left over from prior Democratic administrations. And there was an intent to hide official communications by using the RNC’s email servers instead of those at the White House as required by law. On top of all of that, there were millions of emails that were never recovered. And the explanation given was that it was just a computer glitch. Which is funny because Perino mocked any suggestion that any of Clinton’s missing emails might have been inadvertently deleted by tweeting:

"Whoopsie" is not a great defense.

What makes this even worse is that Perino just happened to be Bush’s press secretary at the time. That’s right, she was not a pundit, she was the President’s spokesperson. And this was the White House itself (not some home server) that lost millions of emails (not only 30,000) that were then being requested by investigators. And it was Perino who defended this blatant malfeasance. Here she is downplaying the matter in a report on CNN by Ed Henry (now at Fox News, but off the air because he was caught having an adulterous affair):

Perino actually used the defense that “there’s no indication the emails were intentionally lost,” which she dismisses as a defense for Clinton whom she believes should be prosecuted regardless of lack of intent. Now that’s a double standard. And it is astonishing that Perino could be so rattled by the FBI’s report when she herself was so intimately involved in spinning an identical controversy when she worked for Bush. Of course, now that she’s at Fox News, she’s still spinning for the same right-wing gang.