The surest sign of desperation in a politician is when he resorts to wholly implausible and baseless conspiracy theories. These delusions are generally aimed at imaginary enemies that are perceived to be bearing down from all directions. Donald Trump crossed over into that paranoid territory months ago as he began a systematic suppression of the press that covers his campaign and abstaining from appearances on news networks that he deems to be unfriendly. 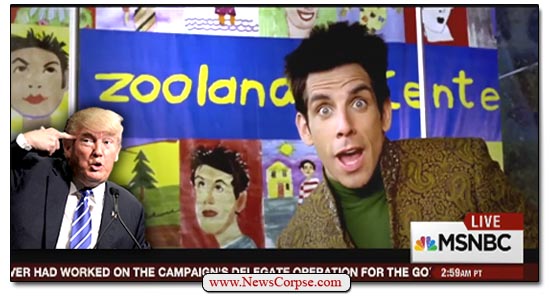 The list of news organizations that Trump is banishing grew yesterday with the addition of what he calls the “failing” New York Times. Trump has been bashing the Times throughout his campaign, but this is the first time that he has threatened to revoke their press credentials and prohibit them from covering his public events. Trump made this threat at a rally in Columbus, Ohio, where he asserted that the Times was “very dishonest,” but failed to provide any instances to back up the charge.

Trump later appeared on Fox News and, in response to a flagrantly leading question from Sean Hannity on whether the media is acting as Hillary Clinton’s press office, he went after the Times again:

Well, perhaps Trump would be kind enough to provide some instructions for the illiterates at the Times on “How To Write Good,” so they can be as goodly at writing as his talking is at. The Times reporters would surely benefit from his famous collection of all the “best words“ that he tosses together with his “very good brain.” Just ask Derek Zoolander, founder of the Zoolander Center for Kids Who Can’t Read Good (an affiliate of Trump University?):

Should Trump carry out his threat to ban the New York Times, they would join the Washington Post, Politico, Huffington Post, BuzzFeed, Univision and a couple dozen other media enterprises. It would be consistent with his knee-jerk hostility to the press, and the principles of a free press, that he frequently refers to as vile scum. If his pattern of blacklisting the media continues, the only reporters covering his campaign will be those from Fox News, the National Enquirer, and his pals at Pravda.