As Donald Trump will be first to tell you, everything he does is BIG, tremendous, the best, and everyone else pales in comparison to his self-exalting greatness. Apparently, that also applies to his awesome display of cowardice with respect to his recent media appearances. 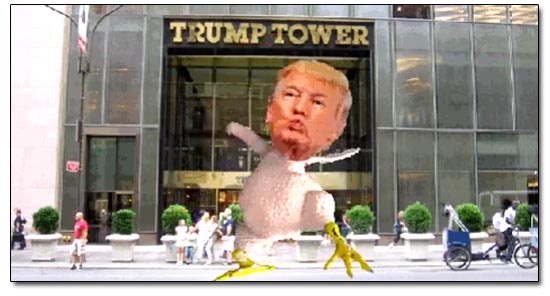 Howard Kurtz is the media correspondent on Fox News and host of MediaBuzz. His commentaries generally comply with the standard Fox requirement of reverence for Donald Trump and knee-jerk Republicanism (for example). But he just published an article for the Fox News website that actually reveals some useful information about the monster that Fox created:

KURTZ: Donald Trump, in a sharp shift in strategy, is now refusing to appear on many television outlets, and top advisers who want to limit his exposure are no longer notifying him of every interview request.

According to sources familiar with the campaign, one faction is worried that the constant rounds of interviews entail too much risk of the candidate making mistakes or fanning minor controversies

There are two startling revelations in those opening paragraphs. First, Trump’s handlers are admitting that he is a gaffe machine and is not competent to speak in public without adult supervision. Secondly, his babysitters have apparently staged a coup and are taking on greater power within the campaign, even to the degree of keeping Trump in the dark and making decisions that deliberately shun his participation. Imagine how horribly that weakness would play out in the Oval Office.

Kurtz notes that Trump has abstained from all appearances on news networks that are deemed to be unfriendly. And since he has broadly tarred the press as vile scum, that doesn’t leave much. He has not consented to an interview on CNN since June 13, or on MSNBC since May 20. However, in that same time frame he has appeared eighteen times on Fox News, mostly with his close personal friends Bill O’Reilly, Sean Hannity, and the curvy couch potatoes of Fox & Friends.

Additionally, Trump has shied away from the Sunday morning talkers that he used to at least call into on a regular basis. His absence on those programs may be due in part to the fact that some of them will not allow him to phone it in anymore. That includes Fox News Sunday where he has not been a guest since April 3. Host Chris Wallace was one of the first to publicly refuse to take Trump’s calls on the air.

It’s reflective of Trump’s character that he is too frightened to face journalists who might be less than adoring. He cannot engage in a substantive dialog on any of the pressing issues of the day because he is too ignorant and refuses to do the necessary study. Consequently, he sticks to sweeping generalities like “build a wall,” “kill the terrorists,” and “make America great again.” He never provides any details on how he would achieve any of those goals, and answering questions from reporters about them only exposes his shallow grasp of a complex world.

In some respects it would seem obvious that Trump is left with only Fox News as the foundation of the media strategy for his campaign. But let’s not forget that he has attacked Fox with some of the same ferocity as he has other networks. He withdrew from one of the Fox News GOP primary debates due to his fear of and revulsion for host and moderator Megyn Kelly. He even supported a boycott of Fox News and tweeted:

That didn’t last long. Trump was on the O’Reilly show later that night. Which is proof that he does not have the courage of his convictions, particularly when his needs are at stake. He is exhibiting personal characteristics that should make every voter nervous about a Trump presidency. He is cowardly, selfish, incurious, fickle, and conceited bigly.

These are not traits that would contribute to successful negotiations with foreign leaders or even here at home in Congress. Trump’s fear of the press and need to be coddled by sycophants, combined with his lust for power and insistence on blind loyalty, are the makings of the worst kind of tyrant: one that is ill-informed, addicted to praise, and susceptible to manipulation by his intellectual superiors (i.e. anyone not Sarah Palin).