The Wall Street Journal recently published a story alleging to have uncovered a secret $400 million payment from the United States to Iran. Never mind that the payment was disclosed by the administration last January and was a settlement of a long standing financial dispute. The WSJ ignited a firestorm of frenzied conservatives falsely asserting that the money was a ransom paid to secure the release of Americans imprisoned in Iran. 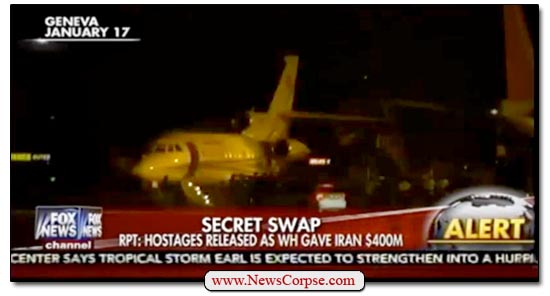 Among the right-wing media spinners that rushed to wield this story as a cudgel against President Obama and Hillary Clinton was, of course, Fox News. They aired a report that parroted the WSJ (also owned by Rupert Murdoch) along with video that Fox implied was of the transfer of American cash to the Iranians. There’s just one problem. The video was actually of a group of prisoners being released in Switzerland.

Not one to let a fake Fox News story go to waste, Donald Trump took to the stage in Daytona, Florida, to address the matter (video below). But he veered even further into a world of delusion as he unfolded a fable of espionage to which he alone was privy:

“I’ll never forget the scene this morning. Remember this: Iran – I don’t think you heard this anywhere but here – Iran provided all of that footage, the tape of taking that money off the airplane. Right? $400 million in cash. How does the President do that? How do you do that? We’re gonna send $400 million in cash, this is in cash, in currency.”

No, Donald, That’s not right. Iran didn’t take any of that footage, which was shot in Switzerland. And there was no cash in it at all. In fact, the claim that the U.S. loaded shipping palettes with cash was utterly false. Due to economic sanctions, the U.S. has no banking relationship with Iran. Therefore, the money was transferred to Swiss banks where it was converted by the them to currencies that they sent to Iran. Trump continued:

“Now, here’s the amazing thing: Over there, where that plane landed, top secret, you don’t have a lot of paparazzi. You know, the paparazzi doesn’t do so well over there, right? And they have a perfect tape, done by obviously a government camera, and the tape is of the people taking the money off the plane. Right? That means that in order to embarrass us further, Iran sent us the tapes. Right? It’s a military tape, it’s a tape that was a perfect angle, nice and steady, nobody getting nervous because they’re gonna be shot because they’re shooting a picture of money pouring off a plane.”

Once again, that is entirely wrong. Iran didn’t send us the tape, and it’s not from their military. So there was no attempt on their part to embarrass the U.S. There was no top secret landing since the entire affair was publicly disclosed by the government. This whole story is as fictional as Trump’s claim to have seen thousands of Muslims in New Jersey celebrating the fall of the World Trade Center towers. That never happened either.

So Trump invented a tale of intrigue wherein he observed a non-existent top secret video of Iranians receiving piles of cash from a clandestine American flight. And just to be clear, his spokesperson, Hope Hicks, was asked by the Washington Post if the video to which he was referring was the one that aired on Fox News. She responded “Yes,” it was “merely the B-roll footage included in every broadcast.” And since we know that that video was not shot in Iran, we also know that Trump’s entire account is pure fiction. Which makes it consistent with pretty much everything else that Trump says (see the Trump Bullshitopedia). and, for that matter, most of what appears on Fox News.

UPDATE: Trump has now admitted that he never saw the video he claimed at least twice to have seen. He gave no explanation for why he falsely claimed to have seen a video that doesn’t exist.