Now that the party conventions are behind us and the presidential campaign is officially underway, the next milestone of the election season is the candidate debates. These events are generally regarded as having more impact on voters’ decisions than conventions, stump speeches, or advertising. Candidates have participated in them regularly since the 1960’s. 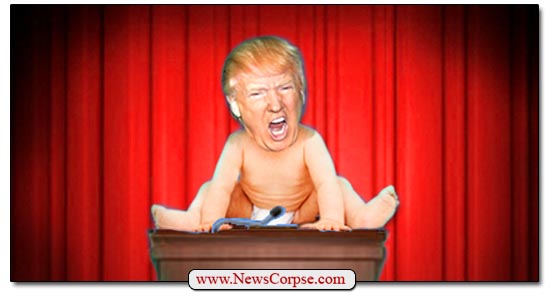 However, Donald Trump has already begun whining about the debates and criticizing the bipartisan Commission on Presidential Debates (CPD) that has been producing them since 1988. He tweeted last month that Hillary Clinton and the Democrats were “trying to rig the debates” in some conspiracy that he failed to explain. For the record, the current schedule was released nearly a year ago (September 23, 2015), long before any of the candidates were chosen.

Now Trump is escalating his debate phobia with suggestions that he will not participate unless his demands are met. Foremost among them is the authority to veto any moderator that he disapproves of (or more accurately, fears). So this may be a good time to take a look at who might satisfy Trump’s litmus test for fair and balanced moderators.

First of all, no one who works for CNN or MSNBC need apply. Trump has not consented to an interview on CNN since June 13, or on MSNBC since May 20. Just this morning he tweeted that “Constant phony reporting from failing @CNN turns everyone off.” What’s more, he has had a devastating falling out with his old pal on MSNBC, Joe Scarborough, who just penned an op-ed calling for the Republican Party to dump Trump.

The broadcast networks are out also, Trump has been flinging his juvenile nickname at the host of NBC’s Meet the Press for months. He calls him “Sleepy eyes Chuck Todd” and labeled Todd as “totally biased” against him. Trump wrote off ABC’s George Stephanopoulos as “a good friend” of the Clinton’s. Scott Pelley of CBS was deemed “disrespectful.”

So You may be thinking that this leaves Fox News. Not so fast. Trump has burned just about everyone on the network with the notable exception of Fox’s Senior Trump Fluffer, Sean Hannity. Trump said of Megyn Kelly that she “is the worst” and has a “terrible show.” He called Karl Rove a “total fool” and “a biased dope.” He said that George Will is a “broken down political pundit” and “boring.” Chris Stirewalt was deemed “one of the dumbest political pundits on television.” Trump laughed off Charles Krauthammer as “a totally overrated clown,” “a loser,” and “a dummy.” And wrapping up the whole network for his disapproval, he tweeted that he was “having a really hard time watching Fox News.” Then he called on his followers to boycott the network. And for good measure, Trump took a swipe at the Fox family’s newspaper saying that the writers at the Wall Street Journal are also “dummies.”

Other prominent news outlets that Trump has sworn off (literally revoking their press credentials) include The New York Times, the Washington Post, Politico, BuzzFeed, the Huffington Post, Fusion, and Univision.

Trump has already demonstrated his tendency to provoke melodrama with regard to candidate debates. He turned the GOP primary debates into feral spectacles of crass immaturity and avoidance of substance. His tantrums succeeded in forcing the Republican National Committee and the media to capitulate to his will, forcing out networks or media co-sponsors that he didn’t think were sufficiently deferential to him. The question now is: Will the CPD permit him do the same for the general election debates?

“Secretary Clinton looks forward to participating in all three presidential debates scheduled by the independent debate commission. […] The only issue now is whether Donald Trump is going to show up to debate at the date, times, places and formats set by the commission last year through a bipartisan process. We will accept the commission’s invitation and expect Donald Trump to do the same.”

Clearly Trump is terrified to face his opponent, Hillary Clinton. But it is also reflective of his weak character that he is too frightened to face journalists who might be less than adoring. Trump is setting up a trapdoor exit to avoid having to do the debates at all. And he’s using the moderator issue as his excuse. It is becoming increasingly evident that the only moderators left that Trump would approve of would be from the National Enquirer or his his chums at Pravda.

ADDENDUM: Fox News reported additional “demands” made by Trump to Time Magazine regarding the debates. He insisted that “certain moderators would be unacceptable, absolutely.” But we still don’t know any that would be acceptable. 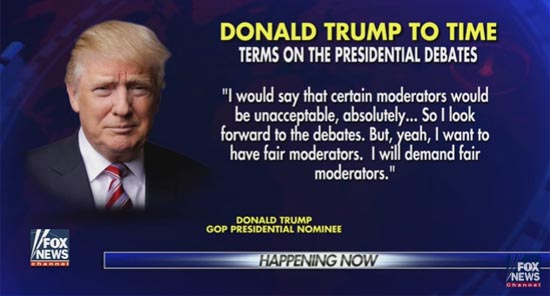