No one is going to be shocked to discover that Fox News is working feverishly to elect Donald Trump president of the United States. They are pulling out all the stops to make excuses for his outrageous statements: His insults to the Gold Star parents of a slain soldier; his dog-whistle calls to assassinate Hillary Clinton; his insane accusation that President Obama “founded” ISIS.

In addition, Fox is obsessively covering anti-Clinton non-stories that have already been debunked by ethical journalists: GOP allegations that ISIS intelligence was altered; Clinton emails tying her aides to charity work for the Clinton Foundation; ludicrous “investigations” into Clinton’s health.

Reality is beginning to warp the judgement of both Trump and his PR division at Fox News. Every recent poll is showing Trump falling further behind, particularly in states that were never considered plausible for Democratic candidates. Consequently, the right-wing network is taking a more hands-on approach to Trump’s candidacy by sponsoring campaign events on his behalf. This advertisement was tweeted today by Fox: 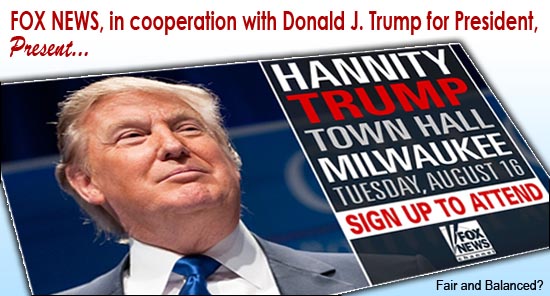 Make no mistake, this not a news event. Sean Hannity has already announced on the air his endorsement for Trump and intention to vote for him. This is a flagrantly biased political appearance that Fox News is producing as a gift to Donald Trump. If the Federal Elections Committee had any integrity they would cite Fox for violating campaign finance laws and force them to declare this an in-kind contribution to Trump’s campaign.

It makes sense that Hannity would announce this scam just as Trump is making excuses for why he might bail out on the debates with Hillary Clinton. Trump would suffer irreparably from the perception of his cowardice if he fails to show up for the debates. But fake “town halls” like this would be his way of discounting that criticism. Never mind that they will be obviously stage-managed farces that are no more informative than a Trump infomercial.

Right-wing partisanship has been the mission of Fox News since its inception. However, this exceeds even their most blatantly prejudiced propaganda by a long shot. Having an avowed Trump fluffer like Hannity host an hour of political theater like this ought to remove any lingering doubts that the network is a Republican shill factory and should not be taken seriously as a news enterprise by the public or their peers.