On Friday Hillary Clinton released her tax returns for 2015, making this the thirty-eighth year she has done so. While Republicans try to tarnish her reputation for honesty, her four decade long record of transparency proves that she has nothing to hide. In addition, it proves that nothing untoward has ever been discovered from making her personal finances abundantly public. 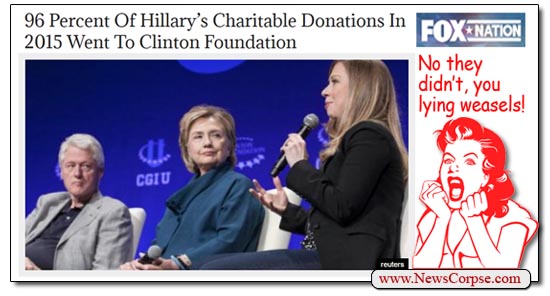 Contrast that with Donald Trump’s refusal to make even a single year of tax returns available for voters to assess his fitness for office. What is he hiding? Could it be that he has paid little or no income tax for many years? Or has he had unsavory relationships with Russians or other foreign entities? Maybe he isn’t as rich or generous as he pretends to be. Clearly he has determined that he has less to lose from the bad publicity of concealing his records than he does from revealing them.

The absence of any legitimate problems with Clinton’s taxes has driven Fox News to invent problems that don’t exist. On their community website, Fox Nation, they posted an article sourced to the ultra-conservative Daily Caller, a pseudo-news site run by Fox News host Tucker Carlson. The Daily Caller’s story alleged that “92 Percent Of Hillary’s Charitable Donations In 2015 Went To Clinton Foundation.” The article alleged that the Clinton’s engaged in a corrupt scheme to claim charitable tax write-offs for funds that they funneled back to themselves, saying that:

“Hillary Clinton and her husband Bill deducted $1,042,000 in charitable contributions last year – $1 million of which went to their own Clinton Foundation.” […]

The documents show that the power couple earned $10,745,378 last year, mostly on income earned from giving public speeches. Of that they gave just over a million to charity. But the contributions can hardly be seen as altruistic, since the money flowed back to an entity they control.”

What’s more, the Daily Caller associated the donations with unfounded charges directed at the Clinton Foundation by right-wing media and activist groups such as Judicial Watch. The problem with that reporting is that the donations itemized in the Clinton’s tax returns did not go to the well known Bill, Hillary, and Chelsea Clinton Foundation that has been the target of the right’s smear campaign. The donations actually went to the private vehicle used by the Clinton’s to disburse their philanthropic gifts, the Clinton Family Foundation. This is a common method of aggregating funds for charitable gift giving used by many high-income families.

After being shamed by Media Matters for their journalistic sloppiness, the Daily Caller added a correction to their story to indicate that the two foundations were separate entities. They did not, however, alter their tawdry conclusions, even though they no longer make sense. And Tucker Carlson still went on Fox & Friends this morning to say that “If I give money to my own foundation is it really charity?” Apparently he doesn’t care that his own website now says didn’t happen. Making matters worse, Fox Nation didn’t even bother to make note of the correction. The headline, which is now known to be false, remains unchanged and utterly untrue.

This is nothing new for Fox Nation, which has a history of brazenly misrepresenting the truth with poorly sourced articles (as documented in the book Fox Nation vs. Reality). Fox Nation is also known for re-posting stories from disreputable conspiracy mongers and conservative propagandists. Their editor, Jesse Watters, makes certain that every day the site is filled with fresh attacks on Democrats, especially Hillary Clinton, who is routinely assaulted with lies that are vicious and defamatory. Very much like the one exposed here.