Seeking to prop up Donald Trump’s frantic and baseless cries of a “rigged” election, Fox News has their fiction writers working overtime. This morning on Fox & Friends the “Curvy Couch” potatoes invited Betsy McCaughey to expound on a new theory. McCaughey is best known for having coined the term “death panels” which Sarah Palin made famous. It became PolitiFact’s “Lie of the Year“ for 2009. 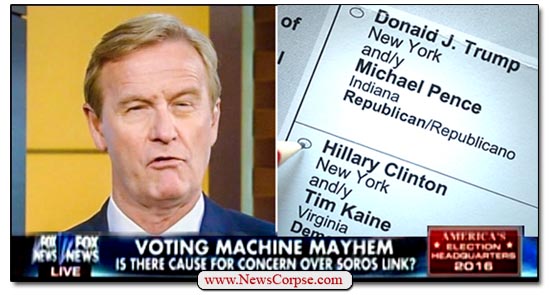 McCaughey’s latest fiction is the charge that perennial wingnut boogieman, George Soros, is clandestinely maneuvering to steal the election from Trump. The plot alleges that voting machines manufactured by a company he controls are being used across the country. Fox host Steve Doocy lays out the conspiracy in a typically hysterical fashion (video below):

Doocy: “Donald Trump has made the rigged system a centerpiece in his campaign. And now there are new concerns after a report showing that 16 U.S. states, 16 of them, have used voting machines tied to leftist billionaire George Soros in the past […] tied directly to George Soros and his personal quest for open borders.”

McCaughey: “That’s right. This really bears investigating. Because Smartmatic, this UK company, one of the top guns there, Lord Mallach-Brown, is very involved with George Soros’ left-wing globalist enterprises, many of which are trying to tilt elections in Europe and in the United States.”

Sounds scary, doesn’t it? And it would be except for the fact that none of it is true. Soros has no financial involvement with Smartmatic whatsoever, and never has. The actual owner sits on the board of Soros’ Open Society Foundation along with dozens of other board members. That hardly equates to a direct connection to the voting machine manufacturer. But that didn’t stop distraught Trump supporters from launching a petition on the White House website demanding that Congress “meet in emergency session about removing George Soros owned voting machines.” At the time of this writing it had 89,000 signatures, on its way to a goal of 100,000.

However, that’s not even the most ridiculous part of this lame attempt at scandal mongering. The Smartmatic machines in question are not being used in the United States at all. Not a single one will be used in any state in the 2016 election. So Fox News, and nearly 90,000 crackpot conservatives, are incensed and determined to rid America of something that doesn’t exist.

Not satisfied with making unhinged allegations about voting, Mcaughey continued her rant to assert that mentally ill and homeless people are being paid to cause violence at Trump events. She doesn’t bother to provide any proof of that, and Doocy doesn’t ask for any. She further claims that:

“There is already an airtight case against Soros trying to tilt this election, steal this election, using his money. He’s very close to Hillary Clinton. He is pouring millions of dollars into third party organizations like the Super PAC, Priorities USA.”

To be clear, McCaughey is now criticizing the Super PACs that were set loose by the Supreme Court’s Citizen’s United decision. Welcome to the progressive movement, Betsy. Liberals have been fighting that decision for years. But don’t expect her to have the same sense of outrage over the Koch brothers or the many other financiers of right-wing PACs. For the record, Soros’ own son started a Super Pac to end Super PACs.

What we can expect is for Fox News to get ever more absurd with far-fetched fairy tales in the few remaining days of this campaign. They are desperate and morose and ready to fling themselves off of rooftops. So maybe they can be forgiven for exhibiting signs of acute dementia.