Just in time for Halloween, Fox News has uncovered a frightful tale of horror. Naturally it implicates Hillary Clinton in a fiendish plot to destroy America. And this time she has recruited an accomplice with magical powers and no pants. 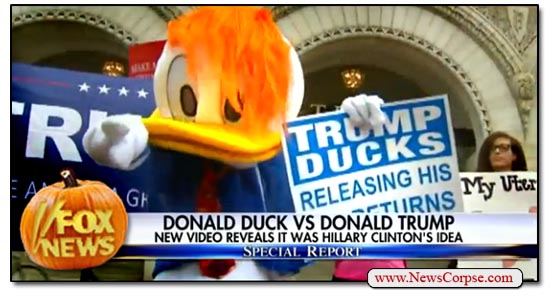 The latest scandal to be revealed by Fox is that Clinton personally ordered Donald Duck to participate in a protest against Donald Trump (video below). That’s right, she’s pitting the two most famous Donalds against each other. And while they’re both quacks who suffer from fits of rage, only one is actually a billionaire (those Disney dollars are still rolling in). Another notable difference is that Mr. Duck is a responsible taxpayer. That was, in fact, the theme of the protest that mocked Trump for “ducking” his duty to release his taxes.

Fox’s Bret Baier led off the segment with an ominous declaration. He warned that “There is a new undercover video exposing direct links between the Hillary Clinton campaign and outside groups promoting her campaign.” The videos to which he is referring were supplied by the unscrupulous right-wing hack, James O’Keefe. His Project Veritas is infamous for doctoring videos to be deliberately misleading.

Baier then introduced Fox correspondent James Rosen to flesh out the story. Rosen parroted O’Keefe’s line saying that the “Donald Duck agitators…could have run afoul of the laws.” Donald Duck agitators? Now that’s scary. And according to Rosen, Clinton is the “mastermind” of their fowl movement. Continuing, Rosen portrays O’Keefe’s video as “a hidden camera confession” from Democratic consultant Bob Creamer. Then he describes Creamer as “A convicted felon who served time for tax violations and bank fraud.” Note: Creamer’s convictions consisted of writing checks with insufficient funds in order to keep his public interest group running. The judge acknowledge that Creamer was not acting out of greed, and all of the money was repaid.

For some reason though, Rosen left out the fact that O’Keefe is also a convicted criminal. He pleaded guilty to trespassing in the office of U.S. Senator Mary Landrieu. On that mission O’Keefe intended to tamper with the Senator’s phone lines, but was caught before he could do so. Nor did Rosen disclose that O’Keefe’s organization is funded by Donald Trump. So Trump is bankrolling a convicted liar who releases doctored videos critical of Democrats. And those videos go from Breitbart News (whose chairman runs Trump’s campaign) to Fox, (whose ex-chairman is advising Trump). Hmm, the system IS rigged.

As it turns out, The Project Veritas videos actually debunked their own allegations. Rather than Clinton coordinating with the protest group, she merely responded that she liked the idea when someone mentioned it to her. That got back to the protest group who decided on their own to run with it. There was no order or coordination coming from the Clinton camp. By the way, even that would not have been improper unless the group was a corporate funded PAC. But nothing in the story indicates that was the case. Consequently, this is just another bogus bit of propaganda from O’Keefe & Co.

This entire affair is either a sign of abject desperation or outright insanity. For Fox News to present this as a serious news story in the waning days of a historic presidential election just boggles the mind. Even for Fox this ranks among the scummiest perversions of journalism imaginable. They’ve obviously exhausted their supply of smears and are resorting to cartoon-based bullcrap that makes no sense at all. It’s kinda sad in a pathetic way.