With less than two weeks before Election Day, James Comey, the Director of the FBI, injected himself into the campaign in a strikingly improper way. There is an unwritten rule at the FBI that has been in effect for decades. It states that the agency will not make public unconfirmed information regarding in-process investigations when the disclosure could have an impact on an election. This rule is typically enforced anytime within sixty days of an election. For some unexplained reason, Comey chose to violate that rule. 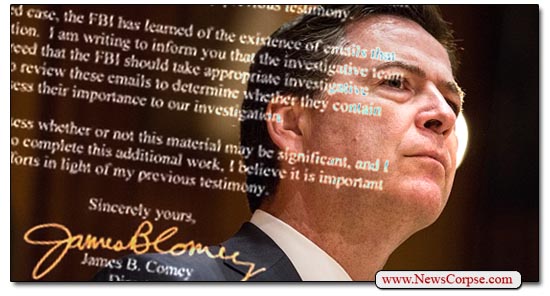 By sending his letter to Congress announcing the FBI’s new investigation, Comey, wittingly or otherwise, benefited Donald Trump’s campaign. The unorthodox communique fueled a torrent of media speculation that Comey ought to have known would occur. He was especially negligent considering the qualifications he included in his own subsequent statements. Here is what he told his FBI colleagues following the letter’s release:

“Given that we don’t know the significance of this newly discovered collection of emails, I don’t want to create a misleading impression. […] there is significant risk of being misunderstood.”

Ya think? Given that you were well aware of the risk of creating a misleading impression, why did you proceed? By his own admission Comey knew of nothing of substance that would be of interest to the public. If he intended to complete the investigation prior to the election he might have had some justification. However, he already said that the investigation will not conclude until after Election Day. Therefore, the only consequence of his announcement is to unfairly prejudice voters against Hillary Clinton. So what happens if Clinton loses the race and is subsequently found to be innocent of any wrongdoing?

The media, of course, rushed headlong into reporting the most salacious interpretation of this news. However, there are numerous reasons to dismiss it as a prime-grade nothingburger. First of all, we already know that none of the emails found were to or from Clinton. Neither did any of them originate from her infamous private server. There is also no evidence that any of them are new. They may be duplicates of emails already submitted to the FBI. And even if any are new, they may not contain any classified information.

In light of how little is known about these emails, it could not have been more irresponsible for Comey to allow this titillating gossip to become public. But having made that mistake, he ought to be willing to set the record straight before anyone votes. Absent that, he should release everything he has so that the public can determine for themselves the significance of this. And that is precisely what Clinton has asked him to do in a hastily assembled press conference:

“The director himself has said he doesn’t know whether the emails referenced in his letter are significant or not. I’m confident whatever they are will not change the conclusion reached in July. […] That is why it is incumbent upon the FBI to tell us what they are talking about. Because right now your guess is as good as mine and I don’t think that is good enough.”

Comey has been receiving harsh criticism from his peers for his actions. Even Attorney General Loretta Lynch and her top deputy objected to his sending the letter to Congress. But Comey decided to disregard their objections and sent the letter anyway. Matthew Miller, a former Department of Justice spokesman, chastised Comey on CNN about the 60-day rule:

“This latest example violates a long-standing practice, which is that the department goes out of its way not to do anything that can be seen as trying to influence an election when you are in the closing days of an election. Usually they interpret the ‘closing days’ as the last 60 days before the election, let alone the last 11 days.”

The Trump campaign is already reveling in this reckless disclosure. Trump himself is making wildly hyperbolic misinterpretations at his rallies. His surrogates have fanned out across the media to hype their knee-jerk, anti-Clinton accusations. And his glassy-eyed disciples are deliriously chanting “Lock her up.” This is representative of the harm done by an FBI director with loose lips.

It’s unfortunate that Comey chose to poison the election with this boneheaded move. As a result, Clinton’s rights as a candidate have been violated by a careless government agency. But more importantly, the people’s right to a fair election is being trampled as purely speculative rumors consume the discourse. Comey now has an obligation to mitigate the damage. He needs to release what he has acquired or to conclude the investigation well before Election Day. Only by doing that can he hope to salvage his reputation and that of the FBI.