WikiLeaks began as a disrupter force in the battle for government transparency. They heralded a movement that professed freedom of information and open access to the inner sanctum of officialdom. Unfortunately, they have now devolved into just another self-serving political propaganda outfit. Their motives are blatantly partisan and they are affiliated with shady foreign powers. 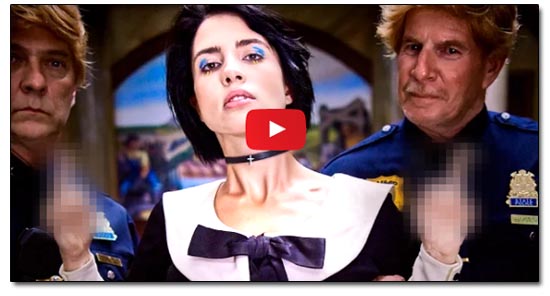 The evidence of the downfall of WikiLeaks is all too apparent. They continue to release packets of documents stolen exclusively from Democrats and others associated with Hillary Clinton. And they don’t appreciate the difference between exposing government secrets and invading the privacy of individuals. They’ve bastardized their supposed mission of open government by peeking into the private lives of their ideological foes. They have even endangered the lives of people by exposing personal and identifiable information.

At the heart of WikiLeaks is its founder Julian Assange. He is currently a “guest” at the Ecuadorian embassy in London as he attempts to evade extradition to Sweden on charges of sexual assault. It’s ironic that this alleged rapist is now furthering the candidacy of a fellow sexual abuser. And while many consider Assange to be a hero, the truth about him is beginning to leak out.

Nadya Tolokno is a member of the Russian music and art collective, Pussy Riot. She recently spoke about her encounter with Assange in an interview with the Daily Beast. What she revealed was a shocking affiliation with Vladimir Putin and the Russian government. She said that:

Assange certainly shares that in common with Donald Trump, whose connections to Russia are tightly woven into his financial and personal life. Tolokno explained that Assange is motivated by deeply held anti-American views:

According to Tolokno, Assange dodged the question. He refused to concede the ethical dilemma of advancing Russian totalitarianism at the expense of democracy. It’s an interesting paradox for a man who professes to believe in freedom of speech, but takes the side of one of the world’s most oppressive and censorious regimes.

Tolokno also had something to say about Donald Trump. She assailed his misogyny, racism, and immigrant bashing. The new Pussy Riot music video (below) is a punishing put-down of Trump and his campaign of hate and tyranny. And she drew some poignant parallels between Trump and Putin:

“They want to oppress people and don’t want them to raise their voices. Their reaction when it comes to people who try to criticize them is very similar: Putin put us in jail, and Donald Trump wants to put Hillary Clinton in jail if he’s elected President of the United States. So it makes perfect sense that Putin would want someone like Trump to take power. […Trump wants] to establish a new conservative right-wing oppressive order all around the world. And we need to do everything we can to stop them.”

Tolokno is providing a unique perspective of someone who has spoken with Assange and been the victim of the Russian oppressors that he is now aiding and abetting. She is right that we need to stop Trump, but we also need to stop Assange and his treacherous acts.

No one should give any credence to his document dumps. They are a breach of personal privacy and cannot even be certified as genuine, unaltered information. He is working with Putin, a former KGB agent, on his projects and is not to be trusted. And the media should refuse to cover the WikiLeaks stories without fully disclosing Assange’s unsavory affiliations and motives.