While the media is busy ignoring frightening reports of Donald Trump’s alliance with Russia, President Obama is ducking past the hacks that populate much of the electronic press. To that end he granted an interview to comedian Samantha Bee on Monday for her TBS program, Full Frontal. 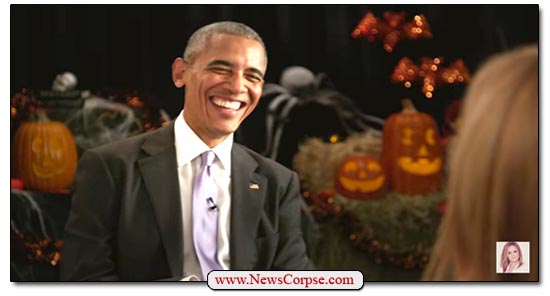 The discussion touched on many of the critical issues of the day, but with a decidedly lighter tone. And Bee did not shy away from the significance of the date that this interview was conducted:

Bee: “Seeing how this is our Halloween interview, can you tell us a spooky story of what will happen if people don’t vote?”
Obama: “Donald Trump could be president.”
Bee: “OK. That was very scary.”

Indeed. It’s hard to imagine anything scarier. A Trump presidency would burden the nation (and the world) with a racist, ignorant, narcissistic, fake billionaire, playing dictator in the White House. It would be horror show that could last four years or more. Giving a reality TV game show host control of a nuclear arsenal sounds like the plot of a Stephen King movie.

Bee asked Obama what he thought Hillary Clinton’s critics would cook up to rival the crackpot conspiracy theories (i.e. birtherism) that were thrown at him. Obama suggested many of the sexist themes that are already a part of the right’s war on women. He speculated that Republicans would portray her as moody and emotional, you know how women are. And expanding on that he observed that:

“When men are ambitions, it’s just taken for granted that, of course they should be ambitious. When women are ambitious, why? That theme, I think, will continue throughout her presidency. And it’s contributed to this notion that, somehow, she’s hiding something.”

Obama made time to express some serious thoughts about the upcoming election and the importance of participating. He particularly addressed his remarks to young voters who often fail to turn out:

“Look Sam, the reason I’m here is not just to celebrate Halloween with you. But is actually because I want to let first-time voters know why it is so important to vote. This is probably the most important election of our lifetime. And the choices could not be clearer. If we want to build on issues like climate change and gender equality, making sure that everybody has health care and making sure young people have a good education and can afford college, they’ve gotta make sure that their voices are heard.”

With Halloween behind us, the threat of a monstrous takeover of our government has not subsided. In order to avoid being destroyed by dark forces of the night it is imperative that every Democrat votes. And while they’re at it, drag along friends and family to the polls. Because the alternative is a vision of apocalypse that could thrust the nation into a dystopian hellscape. That I can tell you.