As Inauguration Day draws closer, Donald Trump’s transition continues to break with ethical standards that have had bipartisan approval for decades. Now his cabinet nominees are scheduled to have hearings in a slap-dash, marathon day of Senate gabfests. This is designed deliberately to make it impossible for senators and citizens to fully consider the nominees. 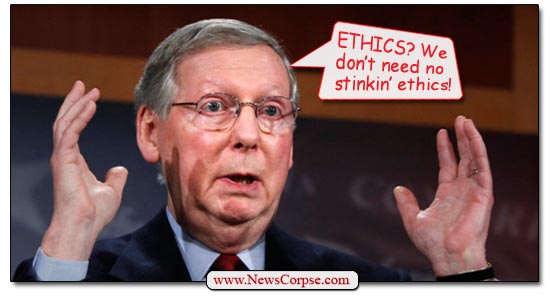 The Office of Government Ethics (OGE) is expressed its misgivings with the Republican scheduling. The OGE director warned that the plan to hold confirmation hearings before the completion of ethics reviews is “of great concern.” In a letter to the Senate he said:

Also expressing concern was the Democratic National Committee. They called for the hearings to be delayed until the ethics office had sufficient time to complete the reviews. Absent that, DNC spokeswoman Adrienne Watson said that “the only reasonable conclusion to be drawn is that they are concerned about what will be exposed.”

Among the reviews still being conducted are FBI background checks, OGE investigations into conflicts of interest, and financial disclosures. And what makes this all the more interesting is that Senate Republican Leader Mitch McConnell had the very same concerns. Not now, but back in 2009 when it was Obama’s nominees being considered. McConnell wrote to then-Majority Leader Harry Reid to insist that all these reviews must be completed and returned in enough time to review prior to the hearings.

Mitch McConnell to Reid in 2009: nominee "financial disclosures must be complete… prior 2hearing being scheduled." pic.twitter.com/wxCfXTPS6g

Joining the call for adhering to ethical precedents was Sen. Elizabeth Warren, who tweeted:

This is ridiculous. @realDonaldTrump’s noms can’t drag their feet on ethics paperwork while their Senate friends try to run out the clock.

Cabinet officials must put our country's interests before their own. No conf hearings should be held until we’re certain that’s the case.

Not surprisingly, Reince Priebus, Trump’s Chief of Staff, is comfortable with jettisoning ethics reviews. On Fox News Sunday he said that “there’s no reason … they have all the information that they need. It’s no different from any other new administration coming in.” However, McConnell’s letter proves that it’s entirely different.

The standards that Republicans impose on Democrats is a much higher one than that to which they hold themselves. That’s why their nominees have been criticized for their blatant conflicts and unsavory behavior. And it’s why Republicans are so anxious to shove these cretins through the confirmation process before everyone finds out about them.