Anyone listening to Donald Trump’s inauguration speech must have thought he was talking about a different country. His description of the United States was dripping with the horror of a nightmarish, dystopian society. He actually used the phrase “American Carnage” to illustrate his vision of the state of the nation he’s inheriting from President Obama. 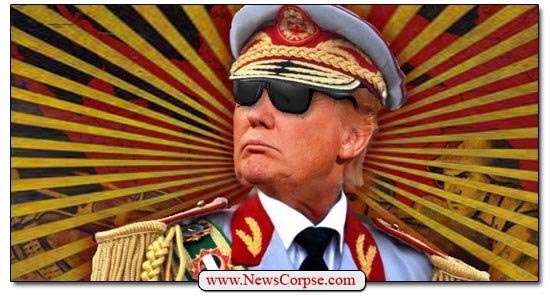 In order to have such a depressing perspective, Trump needs to severely distort reality. By any objective measure the country is currently in remarkably healthy condition. It recovered from a near depression in 2008, and is now experiencing broad-based prosperity. The economy is firing on all cylinders with a stock market that has tripled in the past eight years. The unemployment rate dropped from a high of 10.1 percent to a historically sound 4.9 percent. Bankruptcies and foreclosures have declined precipitously. More people are covered by health insurance than ever before.

That’s not to say that there aren’t still some stubborn problems that need to be resolved. There will always be room for improvement. But Trump’s speech portrayed the country as a hell hole that was barely livable. Some of the rhetoric he disgorged can only come from an aberrant imagination:

Where did Trump get this view of America? Is it something he sees from his 5th Avenue penthouse atop Trump Tower? Did he watch Batman: The Dark Knight Rises and think it was a documentary? Is he just incapable of muting his divisive campaign bluster even after being inaugurated?

And it isn’t just disappointed Democrats who noticed Trump’s downcast oratory. Immediately following the speech, the Fox News panel anchoring their coverage was taken aback. For the most part they wallowed in praise for the POTUS they helped to create, but it wasn’t easy. Brit Hume said that Trump “painted this dark landscape of circumstances in this country.” Chris Wallace observed that “This wasn’t just a transfer of power, but Donald Trump seizing power.” And Tucker Carlson noted, with some satisfaction, that “His election itself is a repudiation of the Obama presidency.” Nevertheless, Trump tweeted a thank you to Fox.

Perhaps the nation expected Trump’s celebration to be something of a downer. They stayed away in droves. The attendance in Washington was estimated to be about 250,000. By comparison, Obama drew 1.8 million in January of 2009 (seven times more). And as obsessed with performance and ratings as Trump is, he surely will not like seeing scenes like this on the Parade route from the Capital to the White House:

As NBC’s Katy Tur noted, entire stands were empty and the crowd noticeably thin. Somehow Trump will declare that the photos and videos were all rigged and that “some said” more millions showed up than ever before. That’s the way he maintains his fictionalized outlook on the world. Everything he does is extraordinary, and anything he criticizes is dreadful.

Thus we have Trump lauding his inauguration as spectacular, and denigrating America as carnage. There is surely a psychological diagnosis for such delusions. But for now we leave him and Melania at the first Inaugural Ball dancing to what may be theme of the Trump Era. Frank Sinatra’s narcissistic ballad “My Way” exalts a dying man’s belief in himself. So everybody sing along: “And now, the end is near…”

8 thoughts on “The American Carnage: Donald Trump’s Bleak Vision Of The Disunited States”