America is going through a difficult period with uncommonly serious challenges unfolding daily. Donald Trump’s first two weeks in office have already produced unprecedented opposition with millions of citizens taking to the streets to protest his regressive agenda. Consequently, the nation has never needed the uplifting effect of biting satire more. And no one is better at it than Jon Stewart. 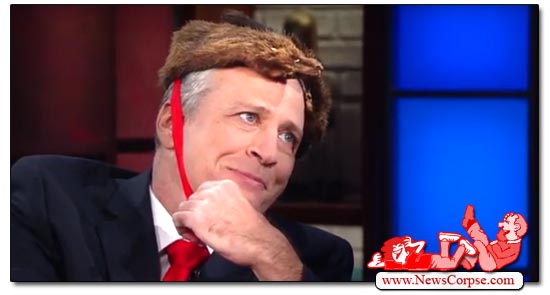 Perhaps sensing the hunger from a troubled nation, Stewart made a rare public appearance with his old pal Stephen Colbert. Tuesday night’s surprise visit to The Late Show (video below) was a welcome respite from the political and personal animosity emanating from Trump’s White House. Stewart strolled onto the stage wearing a ridiculously long red tie and a stuffed animal on his head. That set the scene for a segment wherein he introduced some executive orders that Trump hadn’t yet announced.

Leading off was a unique proposal for completing the wall that Trump promised top build on the Mexican border. Stewart/Trump proclaimed that he would just make China send us theirs. Of course, Mexico would bear the cost because it would be sent C.O.D. while America pretends they’re not at home.

The next executive order would demand something that seems to have already been achieved by the Trump administration. Stewart/Trump decreed that:

“I, Donald J. Lincoln Kennedy Trump III do pronounce America now finally has an official language. The new official language of the United States is bullshit. I, Donald J. Trump, have instructed my staff to speak only in bullshit. And by the way, none of that, ‘Sure, I’ll speak bullshit at work, but at home I’m using facts and real information.’ No. Bullshit all the time. Immersion – it’s the only way to be fluent.”

Judging by the comments coming from Sean Spicer, Kellyanne Conway, and other Trump mouthpieces, he’s already implemented that order. The advent of “alternative facts” makes that abundantly clear. Likewise, the ludicrous and unsupported talk of voter fraud and bogus estimates of inaugural crowd stats affirm Trump’s fluency in BS..

Add to that Trump’s belligerent behavior toward the press that he despises, his bigoted and heartless ban of refugees, and the ongoing drama surrounding his swamp-dwelling cabinet nominees, and you have the making of a toxic presidency. It’s no wonder that he has entered the office with the lowest approval ratings on record. And as Stewart observed in the segment’s poignant finale, Trump is exhausting:

“I Donald J. Trump, want – no, deserve – not just your respect but your adoration. Parades with the tanks and the synchronized dancing. And why can’t they train 10,000 doves to spell out ‘Trump’ in the clouds? How hard can it be? They’re already flying.

“I, Donald J. Trump, am exhausting because it is going to take relentless stamina, vigilance, and every institutional check and balance this great country can muster to keep me, Donald J. Trump, from going full Palpatine, with the lightning coming out of the fingertips and the ‘fear leads to anger, anger leads to hate.’ We have never faced this before. Purposeful, vindictive chaos.

“But perhaps therein lies the saving grace of I, Donald J. Trump’s presidency. No one action will be adequate. All action will be necessary. And if we do not allow Donald Trump to exhaust our fight and somehow come through this presidency calamity-less, and constitutionally partially intact, then I, Donald J. Trump, will have demonstrated the greatness of America, just not the way I thought I was gonna.”

As he often does, Stewart’s faux-news persona presented a picture of current events that surpasses the efforts of the “real” media. He expressed the sentiment of a majority of the nation and their well-warranted anxiety of Trump. But most most importantly, he opened the door to let in a ray of hope. His commitment to “relentless stamina [and] vigilance,” noting that “All action will be necessary,” is just the inspiration Americans need right now. And we could also use more of Jon Stewart providing his unique insight and humor.

2 thoughts on “Jon Stewart (As Trump) Declares: ‘The New Official Language Of The United States Is Bullsh*t’”