It hasn’t even been a full week since Donald Trump became President of the United States. Yet he’s already managed to alienate a nation in which he didn’t even receive a majority of the votes cast. On the second day of his presidency a national protest broke all records for attendance. Meanwhile, his administration immortalized the phrase “alternative facts” (aka lies). 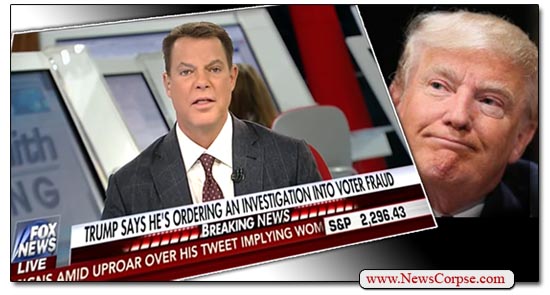 Joining the rush to condemn Trump’s embrace of the post-truth era was a surprising member of the fourth estate. Shepard Smith of Fox News interviewed A.B. Stoddard of RealClear Politics in a segment covering Trump’s intention to launch a “major investigation” into voter fraud. Trump revealed his intention in a two-tweet message:

Never mind that there’s no evidence of any fraud that might justify an investigation or the cost to conduct it. Or that his examples of potential fraud are nothing but ordinary instances of people moving, becoming citizens, or dying. Trump is determined to get to the bottom of a big fat nothing. And Fox’s Smith isn’t having it. He introduced the segment with a question for Stoddard:

Stoddard responded saying that the debunked claim is something that Trump “believes.” And as Trump’s press secretary poignantly said, “he believes what he believes.” Stoddard also noted that Trump cited a Pew poll, whose pollsters deny that their work supports the voter fraud claim. In fact, they reiterated that the only thing their survey found was inaccuracies in registration records, but no fraud whatsoever. Whereupon, Smith continued his presentation of the facts and their consequences with confirmation from an unlikely source:

“John Busby from the Wall Street Journal suggests that the big picture here is start an investigation; find some instances here, there, and yon of voter fraud; get people whipped up; and then put in rules to suppress the vote across the country. A pattern that we’ve seen in state after state over the past four or five years.”

Perhaps the most startling comment from Smith was an overt acknowledgement of Trump’s casual disregard for the truth. Turning to Stoddard he said “The list of falsehoods from the President is growing. Does this have a cumulative effect?”

Stoddard replied that it was unfortunate that Trump was fixated on “crowd assessments that were demonstrably false.” Or that he sent “his press secretary out to lie on Saturday night.” And now, she said, he resumes the voter fraud nonsense. She further noted that his rambling “hinders his credibility around the world and the credibility of our democracy.”

This segment was both accurate and informative. which makes it all the more surprising that it aired on Fox News. It’s a bad sign for Trump because, if Fox News is starting to report honestly about him, his popularity is likely to descend to depths below its already record lows.