Friday morning the jobs report from the Bureau of Labor Statistics was released for the month of January. It showed a healthy increase of 227,000 persons employed, which was significantly more than was projected. These numbers extend Obama’s job creation to a record 76 consecutive months of growth.

So leave it to Fox News to lavish praise on Donald Trump for what they call the “first jobs report under Pres Trump.” Never mind that Trump wasn’t sworn in until January 20, and this report concludes with data as of January 12. That didn’t stop Fox from pasting a graphic over the video that proclaimed “More Winning.” 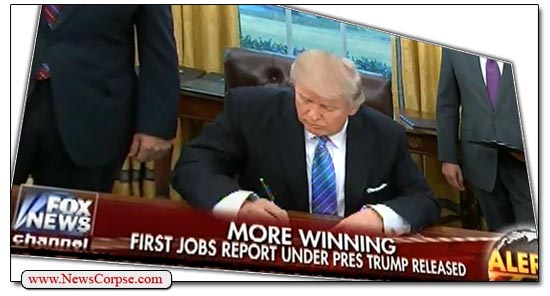 In a meeting with corporate CEOs (video below), Trump addressed the jobs report saying:

“A couple of things happened this morning. 227,000 jobs. Great spirit in the country right now, so we’re very happy about that. I think that it’s going to continue, big league. We’re bringing back jobs.”

Notice that he referred to “we” in a blatant attempt to grab credit for employment numbers that he had nothing to do with. Even if he deserved credit for some of the jobs he claims to have saved at companies like Carrier, it amounts to a few hundred at best. During the Obama administration there were eleven million jobs created.

What’s more, Trump has previously dismissed these jobs reports as phony and manipulated to make Obama look good. He disputed the data and offered his own “alternative facts” for which he refused to provide documentation. His wildly exaggerated estimates earned him a “Pants-On-Fire” designation for lying. He previously characterized the jobs statistics as:

“…the biggest joke there is in this country. […] The unemployment rate is probably 20 percent. But I will tell you, you have some great economists that will tell you, it’s a 30, 32. And the highest I’ve heard so far is 42 percent.”

The same people in the same department produced this new report. But since it was released two weeks after he moved into the White House it has renewed credibility. In reality, it merely enables him, and Fox News, to steal credit that he doesn’t deserve. That’s something he does on a regular basis. So expect more of that sort of dishonest self-glorification for as long as he’s president. And expect Fox News to provide the propaganda to go along with it.