Fallout from Donald Trump’s brazenly anti-American attack on the press continues to spread. Last Friday he posted a comment on Twitter that has been universally assailed for its hostility to the Constitution and one of its most cherished principles: A free press. He tweeted:

The FAKE NEWS media (failing @nytimes, @NBCNews, @ABC, @CBS, @CNN) is not my enemy, it is the enemy of the American People!

The reaction to this nauseating tweet was immediate and profound revulsion. Needless to say, Democrats have been united in condemning these remarks. And the response from the Twitter community was a flood of disgust, along with examples of heroic journalists under the hashtag #NotTheEnemy. 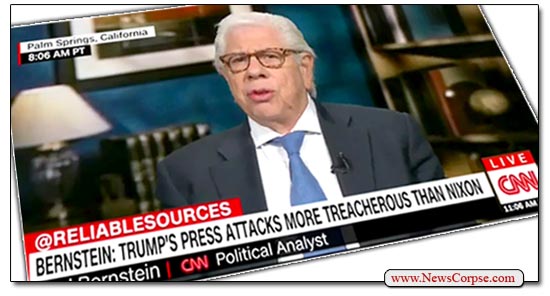 However, offense was not taken solely by Democrats and liberals. Trump’s Republican colleague, John McCain, noted that “That’s how dictators get started.” His own Secretary of Defense, James Mattis, disagreed with the “enemy” rhetoric. And in an interview with White House chief of staff Reince Priebus, Chris Wallace of Fox News said that Trump had “crossed the line.” “We don’t have a state-run media in this country,” Wallace told Priebus. “That’s what they have in dictatorships.”

In addition to these stinging rebukes, there was one that might pack an especially painful wallop. Carl Bernstein was half of the renowned pair of journalists, Woodward and Bernstein, that uncovered the Watergate scandal. Their investigative reporting culminated in the resignation of disgraced former president Richard Nixon. The whole story was as intriguing as any spy thriller. Nixon’s crimes included electoral corruption, perjury, pay offs, and cover ups. So it’s pretty significant when Bernstein appears on CNN and says this (video below):

Having been an eyewitness to one of America’s most notorious political scandals, Bernstein has credibility with this issue that is unparalleled. He is plainly disturbed by the language emanating from this president. If Nixon’s crimes warranted impeachment, than what does that say about Trump’s “more treacherous” behavior? Bernstein had more to say about it himself:

Trump’s slander of the media as an “enemy of the American people” is just the latest unhinged swipe he’s taken at the press. His previous assaults were castigated by groups like the Committee to Protect Journalists, who warned that “A Trump presidency would represent a threat to press freedom in the United States.” Yet he continues to escalate a dangerous dialog that could incite violence against reporters. After all, his rabid followers take very seriously anything that he tells them. And when he tells them that the press is the nation’s enemy, to what lengths might they go to “protect” their country?