Donald Trump has been desperately deploying weapons of mass distraction aimed at diverting attention from his mounting failures. His goal is to keep the public and the press occupied with fictional stories of terrorism in Sweden and allegations of fake news. Meanwhile, his national security team is falling apart, his immigration initiative was ruled unconstitutional, and controversy surrounds his cabinet appointees.

The most troubling scandal enveloping Trump’s nascent administration concerns his curious connections to Russia and Vladimir Putin. New incriminating evidence of collusion continues to seep out every day. His disgraced former National Security Advisor, Michael Flynn, was discovered to have held talks with Russian agents during the campaign. That led to his dismissal by the President. But it still isn’t known what Trump and his White House staff knew during and after those talks.

Trump’s response to these inquiries is that it’s all “fake news” meant to harm his presidency. He even went so far as to accuse the media of being the “enemy of the American people.” But the American people may have a different opinion. 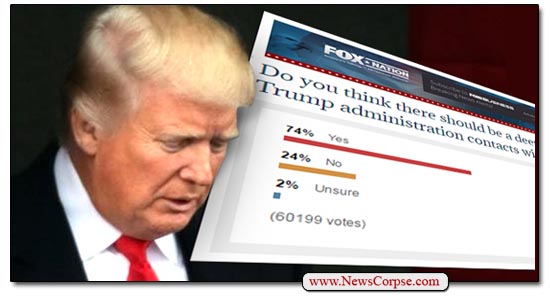 A new poll was just posted on the Fox News community website, Fox Nation, on this subject. It asks “Do you think there should be a deeper investigation into Trump administration contacts with Russian officials?” The response as of this writing might not be what the editors at Fox were expecting. An overwhelming majority (74%) say that “Yes,” there should be such an investigation. In fact, it’s 3-to-1 in favor of a deeper probe. See the current results of the poll here, and cast your own vote.

While this is not a scientific poll, it’s an online survey of the most right-wing, true-believers in the Fox News universe. Even if some lefty trolls sneaked in to tilt the results, it’s unlikely that they could or would have done so in such huge numbers. The total number of respondents at this time is over 60,000. That’s a significant chunk of opinions, and we have to assume that most of them are Fox’s audience.

What this tells us is that there is substantial skepticism about Trump’s dealings with Russia. Even conservatives are anxious about his relationship with a hostile foreign power. They want to know if their president is a traitor. Trump has been unusually tight-lipped about these matters. He still refuses to release his tax returns, which could show a financial connection. And what he has said often contradicts prior statements. He literally has said that he has spoken and worked with Putin. But he also insisted that he has nothing to do with him or Russia.

These contradictions, and efforts to suppress information, are probably why so many Fox News patrons want to know more. They can’t trust him any more than the Democrats can. And while Trump will try to dance around these issues, he can’t keep dancing indefinitely. Like Richard Nixon, the truth will come out in its own time, and his dodgy behavior will only affirm his guilt. If he were smart he would heed the results of this poll among his most loyal supporters. Of course, if he were smart we wouldn’t be discussing this at all. Sad.