The past few weeks have been about as catastrophic for Fox News as they have been for Donald Trump. Both have been suffering devastating setbacks internally with key people leaving under clouds of scandal. And both have lost significant support among the public. With MSNBC’s Rachel Maddow overtaking Fox News in critical ratings demos, and Trump remaining the least popular first-quarter president ever, it seems their dire fates are intertwined. 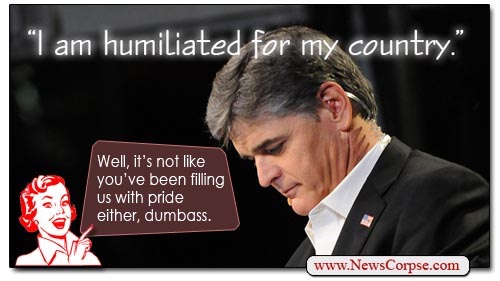 What’s more, both Trump and Fox News still have storm clouds on their respective horizons. For Trump it’s the unfolding revelations about alleged collusion with Russian agents interfering in the presidential election. For Fox News it’s the continuing fallout from their corporate culture of misogyny and racism.

With each passing day a new allegation is made against Fox. Many insiders are unsatisfied with the expulsions of CEO Roger Ailes and blowhard Bill O’Reilly, They believe the problems will persist until there is a thorough housecleaning. Gabriel Sherman of New York Magazine has been breaking many of the stories about Fox’s troubles. He’s the author of the definitive biography of Ailes, The Loudest Voice in the Room. Yesterday he tweeted about a rumored management shakeup at the network:

Fox News in crisis: Sources say Bill Shine asked that the Murdochs release a statement of support but they refused https://t.co/RBUWO8Jsig

Bill Shine is currently the co-president of Fox News. He was promoted shortly after the departure of Ailes. However, many people inside and outside of Fox regard him as not just an Ailes crony, but someone who actively covered up the vile behaviors of Ailes and O’Reilly. When talk of housecleaning is heard, it is generally Shine who is the prime subject.

Enter Sean Hannity. The last remaining prime time Fox Musketeer is profoundly disturbed. Before being elevated to network management, Shine was the producer of Hannity’s program. Consequently, there is an abundance of loyalty that reaches beyond just the network’s standard cult status. Hannity replied to Sherman’s tweet saying:

Gäbe i pray this is NOT true because if it is, that's the total end of the FNC as we know it. Done. Best Sean https://t.co/W3BJ2wjzRD

Of course for many Americans concerned about the media, the end of Fox News would be a welcome event. But that’s obviously not the way Hannity sees it. Fox News has spent twenty years degrading journalism with blatantly biased right-wing propaganda. Simultaneously, they trivialized reporting as nothing more than entertainment with eye-popping graphics and presenters in short skirts. Hannity himself has done annual week-long specials on the evils of Spring Break. But they were just a convenient excuse to show videos of drunken teenagers in bikinis. Now Hannity’s last protector in the management ranks is dangling by thread. According to the Hollywood Reporter’s sources:

“Rupert Murdoch and his sons James and Lachlan, CEO and co-chairman of Fox News parent 21st Century Fox, have quietly put out feelers for a new head of Fox News. And the preference, according to two sources familiar with the Murdochs’ thinking, is that the new leader be female.”

OMG! That would be a fate worse than waterboarding to someone like Sean Hannity. Not only would he be losing a trusted superior, he would have to report to a lady boss. There aren’t very many female executives in the media business, but there are more than zero. And one obvious name would be Elisabeth Murdoch. Rupert’s daughter has already run a media company which she sold to 21st Century Fox (imagine that). But she may be a long shot to head Fox because she may have committed the ultimate sin: She was a Hillary Clinton supporter. If the Murdoch boys manage to hire a credible Female executive, the War on Women at Fox News could take a turn toward fairness and/or balance. That might apply to both the internal personnel situation, as well as the tone of their reporting.

So there remains the question of whether Sean Hannity would stay on at Fox News under those circumstances. He can’t be happy about Tucker Carlson moving into O’Reilly’s time period, or The Five taking the prime time spot before his. He obviously would have preferred to move to one of those spots himself. He must be thinking that his star may be fading at Fox. The younger Murdochs are reportedly not fans. Only time will tell how all of this settles out. And there may be more scandalous shoes to drop. Which begs the question: How many damn shoes do they have?