Wednesday morning a deranged man opened fire on a group of Republicans practicing for a charity baseball event. Fortunately there were no fatalities, but several people were wounded including the GOP House Whip, Steve Scalise. Capital Police returned fire and killed the gunman. This is a horrific act of violence for which there is no excuse, and members of both parties have come together to condemn it. For the most part. 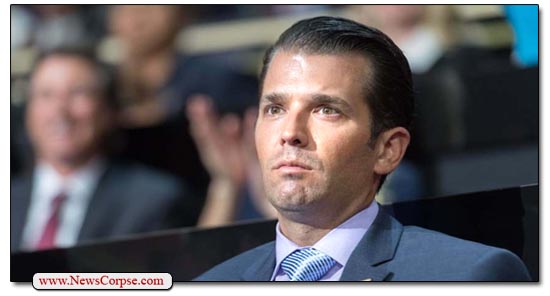 Sadly, there are some on the right who leaped to the opportunity to take political advantage of this tragedy. And at the top of the list is the eldest son of Donald Trump, Don, Jr. The Trump scion retweeted conservative pundit Harlan Hill who posted this offensive and false sentiment: “Events like today are EXACTLY why we took issue with NY elites glorifying the assassination of our President.”

Trump and Hill are referencing a production of Shakespeare’s Julius Caesar where the title character was made up to resemble Trump. But they are woefully ignorant of the content of the play which concludes that political violence is abhorrent and counterproductive. What’s more, they never had any complaints when the same play was staged with President Obama in the role of Caesar.

More to the point, Trump, Jr. is demonstrating a callous disrespect for the victims and their families by rushing to politicize this shooting. It exposes his obsession with partisan antics aimed at disparaging Democrats. And he isn’t alone. Other Republicans have also dived into the scummy end of the pool. Rep. Rodney Davis (R-Ill.) called it a “political rhetorical terrorist attack.” Fringe wingnut radio talker Michael Savage tweeted “I warned America the Dems constant drumbeat of hatred would lead to violence!” Alex Jones’ InfoWars deemed it “media-inspired terror attacks.” That’s notably different than his take on the Sandy Hook murder of twenty children as a hoax staged with actors.

Conservative websites like the Drudge Report and Breitbart News joined in the pile on against Democrats and liberals. Never mind that every Democrat who has spoken out about this has unconditionally condemned it. And then there’s GOP congressman Chris Collins (R-NY), who assigned the blame solely to Democrats for rhetoric that he said “fuels the fires.” He continued:

“I can only hope that the Democrats do tone down the rhetoric. The rhetoric has been outrageous. The finger-pointing, just the tone and the angst and the anger directed at Donald Trump, his supporters. […] Maybe this is a wake-up call. I’m not saying it will be. But let’s hope we could disagree on a more polite, conversational basis.”

So Collins’ idea of being more polite is to accuse Democrats – and only Democrats – of inciting violence. And his solution to finger-pointing is finger-pointing. Just for the record, Republicans have been notoriously hostile toward Democrats for decades. And that has only worsened during the Era of Trump, who famously suggested “2nd Amendment solutions” to handle Hillary Clinton. And who can forget the images of Obama being lynched that were circulated endlessly by right-wing trolls. In many cases they were further disseminated by GOP officials.

Republicans are right to admonish anyone who glorifies violence against political adversaries. They’re right to condemn such violence when it occurs. But they are just bending the arc of hypocrisy to the breaking point when they assert that they are not at least as guilty of hostile partisan rhetoric. And they need to extend their outrage to abortion clinic bombings, assaults on Muslims, LGBTQ people, women, African Americans, Latinos, etc. Then they can start to consider lecturing Democrats on civility.

3 thoughts on “Trump, Jr and Other Republicans are Already Blaming Democrats for Scalise Shooting”