There has never been a presidency before like the one America is suffering through now. In less than five months Donald Trump has scored record low approval ratings. There are credible calls for impeachment swirling around Washington and the nation. And no wonder. He is being investigated by a special prosecutor for scandalous allegations involving his unsavory connections to Russia. His efforts to implement an unconstitutional Muslim ban have been repeatedly struck down by federal courts. The tax reform he advocates (for the wealthy) has gone nowhere in Congress. His anti-media fetish continues to drill deeper into the realm of pathological paranoia. And all the while he exalts himself as the Second Coming of a political Messiah. 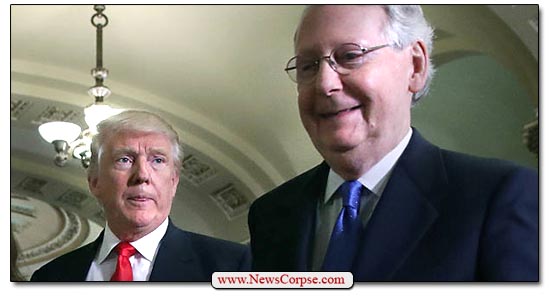 Among his many failures is the callous attempt to deny healthcare for tens of millions of Americans. Trump and his Republican colleagues in Congress continue to pursue their efforts to repeal ObamaCare despite the public’s disapproval. The GOP plan is languishing with support of only twenty-one percent, with fifty-six percent opposed. Meanwhile, support for ObamaCare is growing.

That may explain why Republicans are now engaged in a clandestine scheme to kill ObamaCare while they think no one is watching. This brazenly overt legislative deception is an insult to voters. When asked why they are withholding the plan from public view, a senate aide replied “We aren’t stupid.” That’s an admission that they know their plan sucks and would be met with stiff resistance from the American people. But it’s even worse than that. According to Steve Benen of the Maddow Blog:

“The word ‘un-American’ is probably used a bit too often, usually to impugn others’ patriotism, but in the case of Republicans overhauling the nation’s health care system, the process is un-American in a rather literal sense. In the United States, we have a legislative system elected officials are supposed to use to pursue their goals and policy priorities. In 2017, however, Congress’ GOP majority has decided to abandon the American policymaking model, without defense or explanation, while pushing life-or-death legislation affecting one-sixth of the world’s largest economy.

“There is nothing like this in the American tradition. Republican leaders are being so secretive about their health care overhaul that even other GOP senators have no idea what they’ll soon be asked to pass.”

Benen goes on to note the “breathtaking hypocrisy” of the GOP who complained bitterly when ObamaCare was before the Congress. They falsely asserted that the Democratic bill lacked transparency. That’s despite the fact that there were dozens of public hearings and hundreds of hours debate before ObamaCare was passed. Neither of which have occurred during the Republican effort to undo it.

Trump has been throwing one of his trademarked tantrums over what he calls “obstruction” from Democrats. “If we had the greatest bill in the history of the world on healthcare,” he said, “we wouldn’t get one vote from the Democrats.” First, of, as noted above, he doesn’t have the greatest bill in history. Secondly, he must have forgotten that ObamaCare didn’t get one vote from Republicans. But at least Democrats allowed them to discuss and amend the bill before passage.

The media is justifiably transfixed by the current crises in the White House. The possibility that the President could be prosecuted and/or impeached is the story of the century. However, they should not be so consumed by that that they fail to inform the public about what Republicans are trying to do under the radar. It is a perversion of democracy and a disservice to all Americans. The GOP must not be allowed to get away with shoving their monstrous mutation of healthcare down the nation’s throat. We need to pay attention and pull the curtain aside to reveal and resist the Republicans’ appalling agenda.