New York’s Public Theater has been providing free performances of Shakespeare in Central Park for more than sixty years. It’s a non-profit, public service that contributes to the cultural advancement of the community and is available to everyone. It is generally not the scene of political controversy, however, last week became a rare exception. 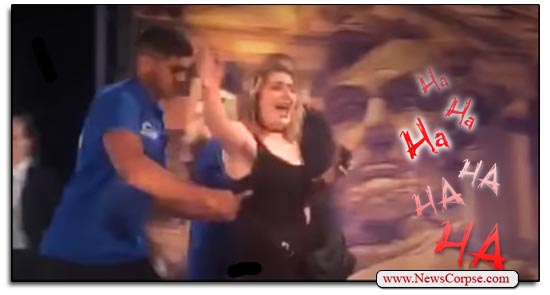 The theater group staged a stylized performance of William Shakespeare’s Julius Caesar. Taking creative license, they cast Caesar as a Donald Trump lookalike. Consequently, when the scene in the play that depicts Caesar’s assassination came, the character was brutally stabbed to death. Unable to distinguish between reality and fiction, conservatives went into a frenzy asserting that the play was advocating Trump’s assassination. It didn’t take long before the alt-right media was accusing all liberals of being violent and bloodthirsty.

Friday night the performance suffered further attacks when a pro-Trump extremist blogger leaped onto the stage. She began screaming feverishly about alleged “political violence against the right.” Ironically, Laura Loomer writes for a website called TheRebel, a name that implies militant violence.

The interruption was clearly not appreciated by the audience. They immediately burst into a chorus of boos as the cast surrounded Loomer and waited for security to escort her from the stage. And as she was led away the audience cheered and applauded. Surprisingly, Loomer posted video of this embarrassment as if she were proud of it.

following the incident, Loomer had her accomplices video her arrest. Of course, she regarded this as a travesty of justice since all she was doing was defending her Dear Leader, Donald Trump. But her harangue drifted into some peculiar, paranoid territory:

How she concludes that this play makes any statement related to race wars is a mystery only her psychologist can resolve. Perhaps it’s an admission that any criticism of Trump would be countered by his devoted racist supporters. But the hypocrisy is glaringly evident. She attacks the left as polarizing mere seconds before insulting them as disgusting and devoid of morals. That isn’t polarizing at all, is it?

Loomer tries to portray herself as an investigative journalist. But her resume betrays that as absurd. She got her start working for the disgraced and irrelevant confessed criminal, James O’Keefe. For a brief period of time O’Keefe made headlines by producing widely debunked, and deceptively edited, videos intended to slander Democrats. Now his reputation is so toxic that even Fox News won’t publish his nonsense anymore.

So it’s easy to see where Loomer got her idea that interrupting a play with incoherent hollering would be a reasonable act of protest. The only thing she achieved was attracting praise from the alt-right true believers who already worship this sort of idiocy. Disreputable folks like Mike Cernovich, Dinesh D’Souza?, and Jim Hoft (Gateway Pundit) rushed to her defense. Alex Jones of Infowars tweeted that she was a “patriot.” And Laura Ingraham of Fox News had this say:

The Left doesn't like it when their tactics are used against their "expression." How many wd storm stage if "Obama" was stabbed? https://t.co/FyY3kuUMmt

First of all, President Obama was the target of innumerable attacks that included stabbing, lynching, and other forms of assassination. The right finds it convenient to forget about that. But Ingraham’s remarks about how liberals would behave in circumstances similar to this one are painfully ignorant. In 2012, the same play was staged with an Obama character in the role of Caesar. There were no protests or juvenile interruptions of the performance.

Hypocrisy is no stranger to the right. When Tea Party activists stormed congressional town halls, conservatives hailed them as heroes. When liberals did the same thing earlier this year, the same conservatives condemned them as subversives. When liberals protest speeches on college campuses by white supremacists they are accused of being against free speech. But when Trump and his cohorts advocate government control of the media, the right cheers and agrees. So if you’re looking the differences between left and right responses to expressions of political viewpoints, you need look no further than people like Laura Loomer and the censorious president she idolizes.