Saturday night Donald Trump took a little time away from lounging at his luxurious golf resort in New Jersey. He flew back to Washington to attend an evangelical concert that supposedly honored veterans in advance of Independence Day. 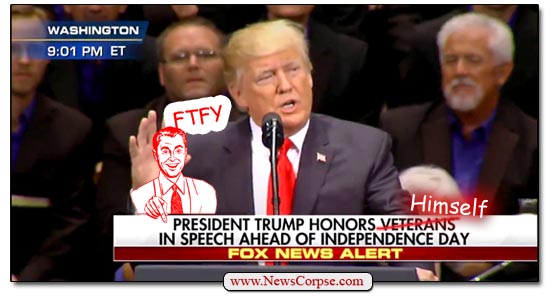 As with almost every public appearance he makes, it ends up being entirely about him. He obviously doesn’t care about veterans or the anniversary of America’s founding. If he did, he wouldn’t pollute his speech with self-serving, ego-gratifying bullshit like this (video below):

“The fake media is trying to silence us, but we will not let them. Because the people know the truth. The fake media tried to stop us from going to the White House, but I’m president and they’re not. We won and they lost.

The fact is the press has destroyed themselves because they went too far. Instead of being subtle and smart, they used the hatchet and the people saw it right from the beginning. The dishonest media will never keep us from accomplishing our objectives on behalf of the great American people. Will never happen. Their agenda is not your agenda.”

That’s right. In an address intended to celebrate freedom and commemorate the heroes that make it possible, Trump lashed out again at the media. That’s what he considers to be the real “enemy of the American people.” And the context of his attack is, once again, the results of an election that took place eight months ago. His rabid fetish over having lost the popular vote is weighing on him still. And his obsession with blaming the press for all of his own self-destructive behavior persists.

Trump’s preoccupation with these complaints borders on the psychotic. He simply can’t let them go, even at the expense of tributes to heroes. And he wastes time and taxpayer money attending these self-congratulatory rallies because that’s where he gets his validation. These are nothing but political events designed to prop up Trump’s fragile ego.

There has never been a president who was more contemptuous of the press. His words and deeds are explicit incitement to violence. He doesn’t understand the meaning or value of the First Amendment. Otherwise, how could he repeatedly denigrate journalists as “sleazy,” “liars,” and “horrible human beings”? His provocations have resulted in actual physical attacks on reporters. NBC’s Katy Tur had to have security protect her while covering his campaign. Organizations that advance the welfare of journalists have called him “an unprecedented threat” to press freedom. And nothing proves that more than his latest tweet that overtly celebrates violence against the media.

If you thought that Trump had crossed the line before, you underestimated the depth of his hostility and recklessness. This is his juvenile idea of a joke, but it conveys a distinct and abhorrent message. There is no reason to think that he won’t continue to get worse. He wants to discredit and dismantle the media so that he can rule without criticism or accountability. Under his idea of authoritarian leadership there would be only state-run media. All Americans must unite to make sure that he is not successful. It’s a fight that is as consequential as the one for Independence that is being celebrated this week.