On Sunday night John Oliver wrapped up his season with another of his brilliant TV essays. The subject of this one addressed a topic that is currently swirling around the news cycle. Donald Trump’s furious hatred of the media and the free press spiked to new heights this weekend. His repulsive WWE themed tweet is a thinly disguised incitement to violence against journalists. And he is continuing his attacks on what he calls “fake news,” but is really just any news that doesn’t worship him sufficiently. 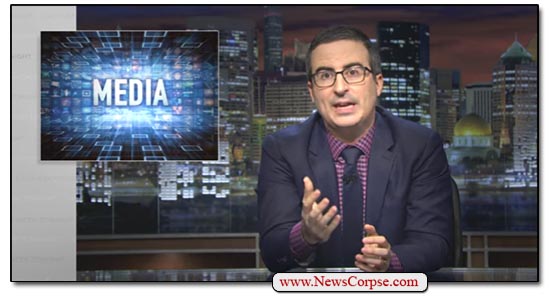 Trump’s anti-media crusade has been laser-focused on CNN lately. But his broader targets include MSNBC, the New York Times, the Washington Post, and virtually everything other than Fox News. However, John Oliver’s show did some deep digging (video below) on an under-the-radar media company that may be even more of a threat to ethical journalism than Fox News.

Oliver’s research found that the Sinclair Broadcast Group produces flagrantly conservative opinion segments for their affiliate stations. No other station group does this. They include commentaries by their chief political analyst, Boris Epshteyn. After advising Donald Trump’s campaign, Epshteyn served as the White House assistant communications director for surrogate operations. He resigned after repeated complaints about his “terrorizing” his media hosts and colleagues. So Sinclair snapped him up.

Oliver tagged the growing Sinclair empire as “The most influential media company you’ve never heard of.” And with its recent $4 billion bid to acquire the Tribune Company’s stations, it will become even more influential. And that’s a big problem. Because, while Fox News is known to be a purveyor of rabidly right-wing bullpucky, viewers are not as well informed about Sinclair’s biases. But Sinclair’s relative anonymity doesn’t make it less dangerous. As Oliver observed:

“We did some math and we found out that when you combine the most watched nightly newscasts on Sinclair and Tribune stations in some of their largest markets, you get an average total viewership of 2.2 million households. And that is a lot. It’s more than any current primetime show on Fox News. Including ‘Five Idiots Have the Most Intolerable Dinner Party Ever,’ and ‘That Guy From College Everyone Hated Has a Talk Show Now, with Tucker Carlson.'” […]

“If the opinions were confined just to the commentary or to the ad breaks that would be one thing. But Sinclair can sometimes dictate the content of your local newscast as well. And in contrast to Fox News – a clearly conservative outlet where you basically know what you’re getting – with Sinclair they’re injecting Fox-worthy content into the mouths of your local news anchors.”

The most disturbing part of this is that, as Oliver notes, “You might not even know this is happening.” That’s because the local anchors are required to read introductions to these segments written by the propagandists at Sinclair headquarters. They are distributed to the stations as “must runs,” so your local news editors have no editorial control. Consequently, your friendly neighborhood TV anchor is feeding you pre-chewed conservative BS without disclosing it.

At the end of Oliver’s program he introduced a sort of public service video. He suggested that it be used by Tribune stations to alert their viewers of the changes to expect after the pending acquisition by Sinclair. It features Steve Schirripa of the Sopranos. He delivers a hysterical, obscenity-laced disclosure that Sinclair’s ultra-biased clips were not not produced by the local station. “Because the people at this station know,” Schirripa says, “that local news should never be about cheap scaremongering or advancing a political agenda.” He closes saying that “If this becomes a Sinclair station, good luck with that shit.”