Friday morning Donald Trump met with Russia’s president Vladimir Putin. This is either their first meeting or their fifteenth, depending on which statement by Trump you choose to believe. In any case, according to the White House, Trump went into the meeting with no agenda. He told reporters that he was honored to meet Putin. That’s a pretty cavalier attitude toward encountering the man who everyone in the U.S. intelligence community says interfered with our election last year. 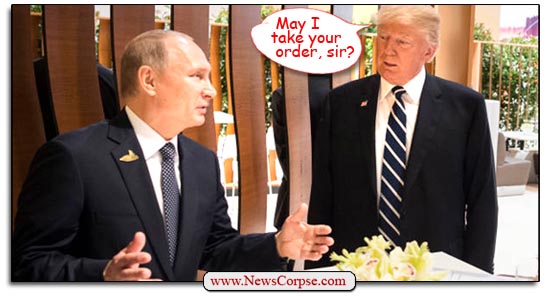 Trump obviously doesn’t care about the election hacking issue. He still insists that “nobody knows for sure” that the Russians were responsible. That opinion is not only dangerously misguided, it is an insult to America’s national security professionals. It also conveniently lets the guy who helped him get elected off the hook. However, it is not the only threat to which Trump is exposing the nation. CNN is reporting that Russian spies are pouring into the country courtesy of Trump’s State Department:

Those 35 diplomats were expelled by President Obama in response to the Russian hacking. It was just one of the actions taken despite Trump having said that Obama had done nothing. But now that Trump’s team is in place they are readmitting suspicious characters. These are potential operatives who could ramp up election tampering activities for 2018 and 2020. And American intelligence officials are worried about just that:

“Fueling law enforcement officials’ concern is that the Russians are targeting people in the US who can provide access to classified information, in addition to ongoing efforts to hack the US government for intelligence, according to several of the officials. In some cases, Russian spies have tried to gain employment at places with sensitive information as part of their intelligence-gathering efforts, the sources say. But that hasn’t stopped the State Department from issuing the temporary duty visas.”

Reports coming out of Trump’s meeting with Putin indicate that he was less than eager to hold the Russian’s accountable. Secretary of State Rex Tillerson said that the focus was on moving forward. That must have pleased Putin immensely. I’m sure he’d like to get on with his plans to hack future American elections. And now, thanks to Trump, he’ll have an army of spies in the country to help achieve his goals.

Russian spies are ramping up their intelligence-gathering efforts in the US https://t.co/7J0CASVnSU pic.twitter.com/PBTaVKqYpx