While Donald Trump has been embarrassing America in Europe (again), his approval rating at home has been declining (again). The meeting of the G20 in Germany produced nothing that benefits the United States. Trump was the only leader who dissented on an agreement on climate change. He left his unqualified daughter Ivanka to represented the country at an important session on Africa. And his attacks on American media, intelligence agencies, and his predecessor, Barack Obama, violated long-held diplomatic protocol against criticizing the country while on foreign soil. The only beneficiary of this trip was Russia’s president, Vladimir Putin. According to reports, he got Trump to agree that Russia had no role in the election tampering last year. 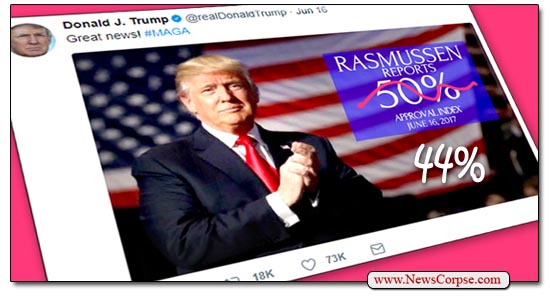 Not surprisingly, Trump’s pathetic performance on the world stage has earned him failing grades from across the political spectrum. Presidential historian Douglas Brinkley went beyond “embarrassing” to call it “juvenile” and “crazy.” But perhaps most damaging from Trump’s own perspective is that his poll numbers have dropped precipitously at the one pollster in whom he has any confidence.

Rasmussen Reports is well known as a stridently right-leaning survey enterprise. Their polling methodology, which relies heavily on robo-calls exclusively to landlines, is not especially well regarded by statisticians. But the results are often heralded by Republicans in general, and Donald Trump in particular. Just two weeks ago he took to Twitter with a post bragging about his rise to fifty percent favorability. Never mind that that means half the country has an unfavorable opinion of him, or that most other polls put him below forty percent. It was a moment he considered worthy of celebration.

Something tells me he isn’t going to tweet the most recent results from Rasmussen. In just two short weeks, Trump has fallen to forty-four percent on his favorite poll. His all-time low on Rasmussen was just one point lower. Fifty-six percent disapprove. But even these low numbers are significantly higher than most other polls. For instance, the Gallup tracking poll currently has Trump with only thirty-eight percent approval.

The nation’s disdain for the President is only partly based on his foreign misadventures. He is also the driving force behind legislation to repeal ObamaCare. Most Americans are opposed to that, with support numbers in the teens. They are also opposed to his immigration bans, his rejection of climate science, and his ludicrous border wall. And his Twitter tantrums attacking the media aren’t getting much support either. Polls asking who is trusted more reveal that the public sides with the press in every instance. So don’t hold your breath waiting for Trump to tweet about that either. He’ll just lash out wildly at the so-called “fake news” and rely on his glassy-eyed disciples to prime his insatiable ego. SAD!