The still nascent presidency of Donald Trump is rife with controversies and scandals. His financial conflicts of interests and unsavory connections to Russia have dominated his short tenure in office. Additionally, he has produced no legislative accomplishments. Most notably, the failure of his efforts to kill ObamaCare went down in flames. He has made no progress on immigration, taxes, terrorism, or his lame-brained border wall. 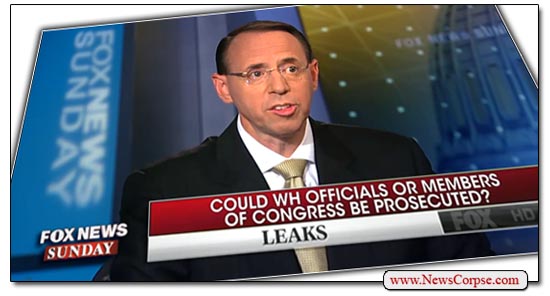 However, Trump regularly signals what issues are of most importance to him. And judging by the frequency of his tweets, it has little to do with matters critical to the nation. Rather, he is variously obsessed with either the media, last November’s election, or the torrent of White House leaks. Most experts agree that leaks occur when an organization is in disarray. But in Trump World it is blamed on a shadowy conspiracy of “deep state” saboteurs.

On yesterday’s edition of Fox News Sunday, host Chris Wallace interviewed Deputy Attorney General Rod Rosenstein (video below). Much of the segment specifically addressed the question of leaks and what the Justice Department intends to do about them. Wallace sought to follow up on remarks made last week by Attorney General Jeff Sessions. Those comments sparked some controversy for implying that journalists could be targeted for prosecution. Rosenstein walked that back a bit in the following exchange:

Wallace: Some of the people who engage in leaks, I don’t have to tell you, are not the members of the so-called ‘deep state’ or faceless bureaucrats inside intelligence agencies. They are White House officials. They are members of Congress. If you find any of them have committed these leaks – have disclosed classified information – will you prosecute?
Rosenstein: “What we need to look at in every leak referral we get, we look at the facts and circumstances. What was the potential harm caused by the leaks? What were the circumstances? That’s more important to us than who it is, than who is the leaker. So if we identify somebody, no matter what their position is, if they violated the law and that case warrants prosecution, we’ll prosecute them.
Wallace: Including White House officials and members of Congress?
Rosenstein: Including anybody who breaks the law.

If Rosenstein can be taken at his word, Donald Trump may be in even more trouble than previously thought. Leaks from any administration are made for a variety of reasons. It may be because someone is genuinely concerned about a course of action and has no other recourse to alter it. Sometimes a leaker is angling for position or acting out of vengeance. And sometimes leaks are deliberate attempts by the White House to disseminate information that it wants disseminated.

For example, Anthony Scaramucci, Trump’s short-lived communications director, recently outed his boss as a leaker. During an interview on CNN, Scaramucci defended Trump’s reluctance to concede that the Russians were responsible for hacking during last year’s election. He even offered “evidence” by way of an anonymous insider:

“You know, somebody said to me yesterday — I won’t tell you who — that if the Russians actually hacked this situation and spilled out those e-mails, you would have never seen it.”

That, of course, is grade AAA bullshit. Professional spies may be good at what they do, but they are not infallible. Scaramucci is suggesting that the Russians are so superior in their clandestine operations that their American counterparts are helpless yokels, incapable of facing off against the almighty Ruskies. But more important was what Scaramucci said next. After CNN’s Jake Tapper challenged Scaramucci’s hypocritical use of an anonymous source, the Mooch spilled the beans:

So here we have a White House official admitting that the President was the source of a leak that disclosed inside information. Trump’s observations about the capabilities of Russian intelligence ought to be regarded as top secret. But this business was aired on national television at the behest of Donald Trump. On another occasion, Trump leaked classified data to Russian diplomats visiting the White House. This leak may have put intelligence assets of an ally at risk of discovery or termination.

Who knows what else the President might have leaked. Handing out information that advances the administration’s interest is an ago-old tactic. Dick Cheney did it to plant the lie that Saddam Hussein had weapons of mass destruction. And Trump has his own media operation headquartered in the White House and led by Breitbart News chairman, Stephen Bannon. Remember, this is the same guy who used to call newspapers and pretend that he was a publicist working for, well, himself.

So if Trump is later found to be the source of leaks to the media, will the Department of Justice keep their word and prosecute him? That’s an open question for the time being. They have not been especially anxious to pursue criminal investigations of the President. And, of course, Trump remains poised to fire anyone he thinks is getting too close to the truth. In the end, it may only be possible to obtain justice with a truly independent counsel, or a Democratic congress. Stay tuned.