On Wednesday Donald Trump laid the foundation for a nuclear confrontation with North Korea. His brimstone laden “fire and fury” speech has brought new and unnecessary tensions to an already shaky relationship. It was an inevitable escalation of craziness from a narcissistic personality with a thirty-three percent approval rating. And of course, it didn’t take long for the media pundits to weigh in with predictably inane debates. 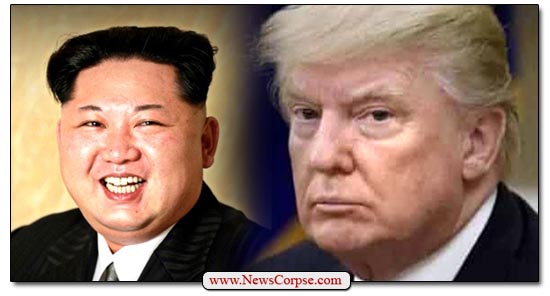 On Fox News Thursday morning there was a particularly confounding view offered by anchor Jon Scott. He wanted to know whether there was a “double standard among the press” for their criticism of Trump’s overheated rhetoric. He was puzzled as to why Trump was being criticized but “nobody seems to care all that much about the threats coming from Kim Jong-Un.”

Let’s be clear about this. Scott is making the absurd inference that the media should treat Trump’s statements with equal significance as a certified fruitcake. On the surface, I can’t really find any fault with that. Trump is at least as batty as Kim. However, when looked at as an American president vs. Kim, the distinction ought be huge. Under ordinary circumstances the U.S. should be regarded as far more serious and conscientious than raving madmen.

Unfortunately, these are not ordinary times. Hence the critique of the press by Scott, who thinks Trump should be regarded in the same league as Kim. But Scott’s guest, fellow Fox News anchor Chris Wallace, wasn’t having it:

“Well, look, we kind of expect crazy from Kim Jong-Un. As I said, he’s the head of the ‘Hermit Kingdom. He’s a pariah for almost the entire world. So, we don’t expect him to be judged the same standard as the president. […] I certainly hope we’re not judging Donald Trump and Kim Jong-Un by the same standards.”

Wallace’s perspective is surely more coherent than Scott’s. But Scott’s is more prevalent on Fox News and throughout the right-wing mediasphere. Even Trump’s Secretary of State, Rex Tillerson, said that Trump was using “language that Kim Jong-Un would understand.” When did lowering our communications skills to the level of babbling nutcases become the goal of American diplomacy?

Wallace deserves some credit for batting down Scott’s absurd allegation of a press double standard. But he still managed to live down to Fox’s low standards for misleading reporting. Woven into his remarks was this completely false observation of the fallout from Trump’s “fire and fury” speech:

“I don’t think anybody objects to the idea that the president was tough and sent a very stern message to the North Koreans.”

Oh really? You would have to be ignoring the letter from sixty members of congress fervently objecting to Trump’s war mongering. And you would also have to have missed the objections from Democratic senate leaders Chuck Schumer and Dianne Feinstein. Not to mention Republican senators John McCain, Dan Sullivan, and Jeff Flake. Trump’s off-the-cuff bluster was widely considered to be inflammatory and counterproductive. And Wallace’s attempt to soft-peddle the backlash only keeps Fox News viewers ill-informed. But then, that’s the mission of Fox News, so Wallace and Scott are just doing their jobs.

3 thoughts on “Fox News Implies That Donald Trump is Just as Batty as Kim Jong-Un. Who Can Argue With That?”