The preliminary Nielsen ratings for the 69th Primetime Emmy Awards broadcast are in and they aren’t particularly good. The program drew about 11.2 million viewers, which is down slightly from last year’s show. But leave it to Fox News to turn this minor slippage into a political catastrophe caused by the relentless liberalism of Hollywood elites. 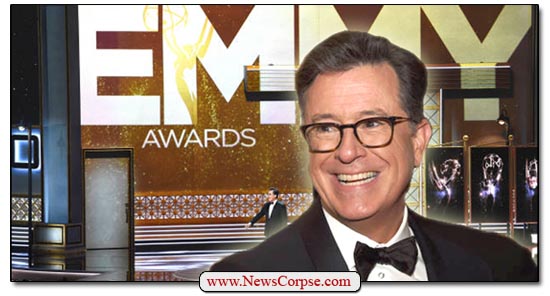 An op-ed on the Fox News website trumpeted the ratings results with a speculative headline asking “Emmys ratings crater; Trump-bashing to blame?” The argument presented by Fox’s Brian Flood was that criticism of Donald Trump sunk the broadcast to new lows. He writes that:

“It looks like the 69th annual Emmy Awards are heading into sub-basement territory in terms of ratings after host Stephen Colbert spent much of Sunday’s event attacking President Trump. It turns out American viewers may not have been as into Trump bashing as Hollywood would like them to be.”

For the record, host Stephen Colbert didn’t spend much of the night attacking Trump. In all he spent less than three minutes out of a three hour program. But the real absurdity of this analysis is that it proposes something that’s impossible. Fox News thinks that viewers chose not to watch the program based on their clairvoyant observation of the Trump-bashing before it even began. Obviously, without such ESP skills they would not have known not to tune in.

In fact, the Emmy broadcast has been scoring lower numbers for several years. Trump wasn’t president when the ratings began a falling trend. The reasons knowledgeable people attribute to the decline are that television doesn’t have the popular appeal of the Oscars and the Grammys. What’s more, many of the winning programs are now airing on services like Netflix and Hulu that have fewer viewers than broadcast TV. Consequently, the stars are not as familiar or compelling. And airing against Sunday Night Football didn’t help either.

That didn’t stop Fox News from setting up their biased perspective and interviewing political partisans to support it. Flood first sought the opinion of Dan Gainor of the ultra-conservative Media Research Center. Predictably, Gainor slammed the event as “a Hollywood bubble show.” He further castigated television’s creative community as out-of-touch with America and unqualified to express an opinion. That’s a point of view that disappears from right-wingers when the TV personality is one of theirs. Case in point: Donald Trump (or Ronald Reagan, Ted Nugent, Clint Eastwood, Scott Baio, etc.).

The argument that Americans might have tuned out the Emmys because they objected to jokes about Trump also fails logically. Trump is currently sitting on record low ratings himself. And that’s from the American people, not a select groups of show business professionals. With his approval numbers wallowing in the mid-thirties, it’s unlikely that the program lost many viewers who were loyal to Trump. If anything, the fact that most Americans are repulsed and embarrassed by him might have drawn in a bigger audience. There is substantial appetite in the country for the Trump-bashing that Fox News is lamenting. An example of that is the fact that Colbert has become the top rated late night talk show host largely due to his nightly mockery of the President.

The program did feature some sharp jabs at Trump’s expense. Veep’s Julia Louis Dreyfus noted that her show had considered an impeachment plot line, but abandoned it because they were worried that “someone else” might beat them to it. Alec Baldwin, who’s portrayal of Trump on Saturday Night Live won him an Emmy, consoled Trump by giving him partial credit for an award he never won himself. But the most cutting comedy came from the reunited stars of 9-to-5 who said:

Those are the sort of comments that Fox News and their conservative disciples regard as intolerable attacks against their White House Messiah. And for some reason they get away with calling liberals “snowflakes” for being too sensitive. Yet it doesn’t bother them when Trump himself posts tweets that show him assaulting Hillary Clinton. Apparently joking about physically attacking women is perfectly acceptable to these Deplorables. But Fox News finds it necessary to write op-eds that lie about the Emmys just because they can’t handle a few harmless jokes.