To begin with, it must be noted that the headline above is fake news. The heads of those on Fox News, and their viewers, were already mush. That said, their exposure to Rachel Maddow’s program didn’t make that situation any better. On Saturday morning the “Curvy Couch” potatoes of Fox and Friends spent several minutes with stunned expressions and babbling recriminations as they struggled to unwind Maddow’s commentary. 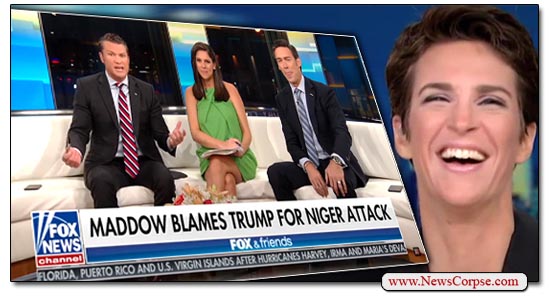 On Friday Maddow laid out a detailed and well researched examination of what might have led up to four Green Berets being ambushed in Niger. The whole segment is must-see TV, and a demonstration of what real journalism looks like. The gist is that Donald Trump’s curious inclusion of Chad on his latest Muslim ban may have caused them to pull back on their anti-terrorism efforts in Niger. Since they were effective at suppressing groups like Al Shabaab and ISIS in the region, it left our troops vulnerable to attack.

Maddow’s report was taken up on Fox and Friends in a segment (video below) that featured a graphic declaring that “Maddow Blames Trump For Niger Attack.” And since the mission of Fox News, and especially Fox and Friends, is to defend Trump no matter the subject, the F&F crew went to work. They began by asserting that the events Maddow discussed were entirely separate and had no possible relation to one another. Of course, anyone with a functioning cerebral cortex could see the direct linkage. Lacking any substantive rebuttal, co-host Pete Hegseth attempted to mock Maddow’s thoughtful demeanor rather than her facts. Then he accuses her of spinning a wild conspiracy theory as “the leader of the left.” But perhaps the most idiotic remarks were offered by co-host Abby Huntsman, who said this”

“It’s dangerous when the media starts having conversations about this and putting in their own theories that are, as you said, completely unrelated to what actually happened. It’s dangerous, not only for us in terms of figuring out what did happen. But it’s dangerous to the families that lost loved ones over there because they’re the ones who should be the focus of this conversation and somehow we go down these roads oftentimes and it’s such a distraction and it’s such a disservice to this country and what our job is in the media.”

Really? Fox News is whining about media “putting in their own theories”? Is that supposed to be satire? And they are pretending to be upset that the families of the fallen aren’t the focus the conversation even though Trump has still not spoken of them or paid any tribute. The three co-hosts then collectively complained that Maddow is a “lazy” journalist. Never mind that she did the legwork to put together a cogent analysis that offers a possible explanation for why four American soldiers died in Niger. All the Fox Friends did was bitch about it. And they never countered a single fact that Maddow raised with “alternative facts” of their own. And then Huntsmen launched this bit of unintentional hilarity:

“I can’t tell you how many of my friends I talk to, it’s like, they have no idea where to go to figure out what’s actually going on. I hear that from my family, my friends, people I just talk to on the streets.”

Let that sink in. Her own friends and family tell her that they don’t know where to get reliable news. Which means they don’t think they can get it from her or Fox News either. She may have friends and family that are smarter than she and her Fox colleagues. But still not smart enough to understand Dr. Maddow.