Wednesday night saw the return of The annual Country Music Awards. It was a star-studded affair that featured the best and brightest of the genre. The program was a huge success in the ratings, topping the primetime lineup for the evening and hitting a three year high. 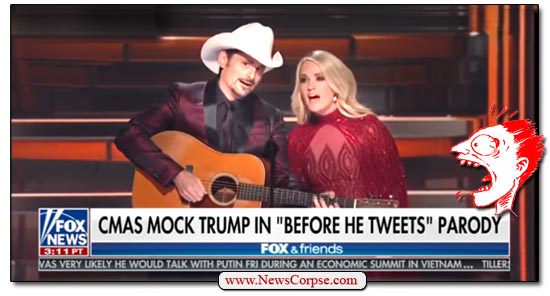 One of the highlights of the program was a duet between Brad Paisley and Carrie Underwood. Their rendition of “Before He Tweets” was a lighthearted mockery of Donald Trump and his fetish with Twitter (video below).

So guess what? The “Curvy Couch” potatoes at Fox and Friends were bitterly distraught at the prospect of having lost country music to the evil liberals and anti-Trump media. They lamented over the unspeakable act of disrespectfully taunting their Dear Leader with a comical farce. The whine-fest began with a plaintive moan from co-host Steve Doocy:

“Remember the olden days when football wasn’t political, and so many things weren’t political? Well now, as it turns out, the CMAs have gotten very political.”

These pop culture authorities apparently think that musical genres have a God-given political affiliation. Any divergence from that is sacrilege. And just the thought of it sends them into nostalgic yearnings for a bygone era that only existed in their imaginations. Don’t these new country heathens know that right-wingers own their musical biases? Hell, if they’re gonna act like liberals they should just go to MTV and play the Devil’s rock music.