Being a notorious sexual predator who has paid out tens of millions of dollars to victimized women is taking its toll on Bill O’Reilly. Now that he’s sequestered to his chintzy weblog since Fox News fired him, O’Reilly is exhibiting signs of acute mental distress. Among other humiliations, he has been making guest appearances on Sean Hannity’s radio show despite having hated him when they were Fox News colleagues. 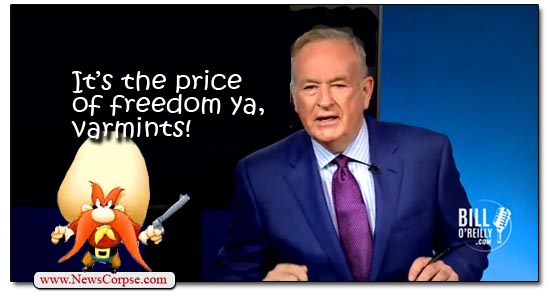 On Tuesday O’Reilly posted a mini-rant on Twitter (video below) to complain about criticism he received for his remarks on gun regulations. Following the Las Vegas massacre, O’Reilly wrote on his website that:

“This is the price of freedom. Violent nuts are allowed to roam free until they do damage, no matter how threatening they are. The Second Amendment is clear that Americans have a right to arm themselves for protection. Even the loons.”

Gee. Why would anyone criticize that? O’Reilly is just quoting from the Constitution’s “Even the Loons” clause of the Second Amendment. Never mind that he is expressing a perverse comfort with potentially violent miscreants obtaining guns at will without any public safety oversight. Even worse, he is justifying the carnage as an acceptable consequence of making sure that every American has unfettered access to assemble a personal armory. And so O’Reilly takes to Twitter to double down on his lunacy, posting this belligerent response to his critics:

“The last time the Vegas thing happened I said this is the price we pay. This is the price of freedom. And all the left – ‘Oh O’Reilly, arrgh – [blubbering sounds].’ Look you pinheads, our freedom dictates that police cannot intervene unless a crime is committed.”

So O’Reilly is cool with dozens of people being slaughtered at a country music concert so long as psychopaths can still buy AR-15s. Then he asserts that “everybody knew this guy was bad news.” He was referring to the shooters in both Las Vegas and Texas. He went on to say that the price of freedom demands that the rights of people like these to buy guns supersedes the rights of the rest of us to live. And while he notes that there is an exception for people with felonies, he apparently forgot that the Texas shooter’s criminal record had not been properly recorded. But here is where O’Reilly slipped off the rails:

“In the Reagan years there was a downgrading in getting people institutionalized. So it used to be a lot easier, in this country, to put people who are misbehaving, or behaving in an aberrant way, under observation and to take them off the street. But then the ACLU stepped in, the civil liberties people, and ‘Ah, no no no.’ So now you’ve got people walking all over the place and the authorities can’t do anything. [Raising his voice} The Price of Freedom!”

First of all, there was no “downgrading” of criteria to institutionalize someone in the Reagan years. What Reagan did was to close institutions in order to cut his budget as governor of California. That meant that thousands of people who were previously being treated for mental illness – voluntarily in many cases – were put on the streets. It was a budgetary decision, not a medical one.

Secondly, WTF is he talking about? He starts off reminiscing about the good old days when it was easier to lock up people for psychological reasons. He even takes a swipe at the ACLU for protecting the rights of the mentally impaired. And he bitches about all the free-roaming nutcases who can’t be involuntarily incarcerated. Apparently, freedom doesn’t mean that people with mental problems should be allowed to actually be free. However, he then reasserts his premise that freedom does mean they should all be able to arm themselves to the teeth.

If O’Reilly got his way, and the “authorities” were allowed to pick up “people who are misbehaving,” O’Reilly would have to be at the top of the list. Anyone with his decades long history of sexually harassing and assaulting women ought not to be “walking all over the place.” And his clear inability to articulate a coherent thought makes his case all the more troubling. He’s obviously a very sick man, in more ways than one. And in the final analysis, his “price of freedom” was $32 million (and more) paid to silence his victims.

THE PRICE OF FREEDOM. Our freedom dictates that police cannot intervene unless a crime is committed. Troubled people have individual rights. pic.twitter.com/6RjGMeaT39